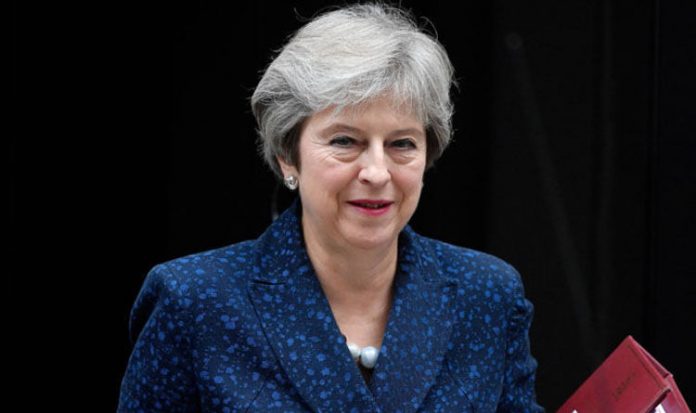 The Prime Minister has summoned members to a special meeting on September 24 – a week before the conference in Birmingham.

Tories have been promised a discussion on immigration will be high on the agenda, according to The Times.

It comes as Theresa May clings on to power amid claims Brexit rebels are planning to oust the leader in a party coup if she refuses to change her Chequers plans.

On Wednesday, MPs attended a meeting of the European Research Group to “openly discuss” how to “chuck” Mrs May.

But Brexiteer and ERG chairman Jacob Rees-Mogg denied there was a threat to Mrs May’s premiership.

Up to 50 MPs are threatening a vote of no confidence, according to MPs.

If 48 letters are submitted to the 1922 Committee, a vote of no confidence would be triggered.

Despite increasing pressure, Theresa May is yet to put forward a post-Brexit plan for immigration.

But the prime minster remains united with Sajid Javid for a global migration scheme.

This could mean that when Britain leaves the EU, preferential treatment for EU citizens is likely to end and they could be subject to non-EU citizen restrictions, including visa applications.

Caps could also be place on the number of skilled and unskilled workers entering the UK from the EU.

But Whitehall sources have predicted a tense showdown over migration due to concerns over the global scheme from colleagues including Chancellor Philip Hammond and Business Secretary Greg Clark.

But Brexiteers are likely to welcome tougher rules on migrant workers from the EU and will reject any plans that form freedom of movement.

Net migration fell below 250,000 for the first time in three tears earlier this year – but it remains over the promised 100,000 target first set by David Cameron’s Tories in 2010.

Mrs May has previously hinted she will battle to get the level of immigration below 100,000 by 2022 – the end of the next five year parliament despite pressure from her own Cabinet to ditch the controversial target.