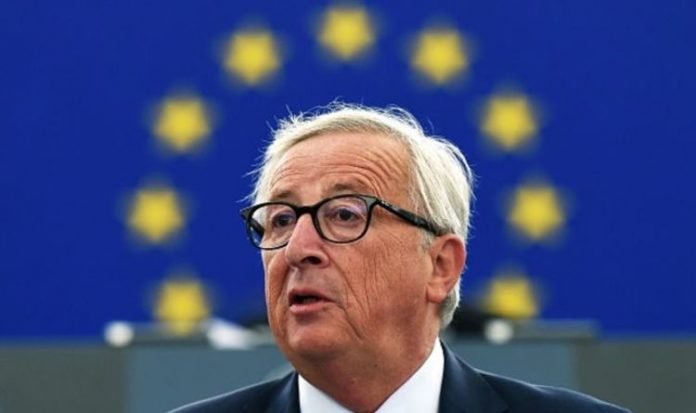 The ambitious legislative change would mark the end of daylight saving for all EU member states which have been issued an April deadline to chose whether to scrap the clocks going forward in March and back in October.

The change, spearheaded yy Mr Juncker, would have serious implications on Britain once it leaves the EU, causing a “ticking time bomb” on the island of Ireland.

Mr Juncker wants to scrap the clock switch by October 2019 after 4.6million Europeans responded to an EU consultation calling for the new system.

But critics have said it will poorly affect logistics companies and rail services that say they will be forced to make changes to schedules.

The proposal was launched in a bid to improve the health of Europeans who complained that the uncoordinated time changes between neighbouring member states had caused economic harm.

Should it go ahead, the EU could be making its last clock change on March 29 next year when Brussels would remain in permanent summertime.

Despite many believing the move would not affect Britain because we would be out of the EU by then, it would have an affect on the Northern Ireland border.

Should the UK continue the tradition of changing the clocks post-Brexit, it threatens to create a new time border between Belfast and Dublin, which will remain part of Europe.

The DUP’s Sammy Wilson said: “It’s just further proof, as if it were needed, that Brussels is bonkers.

“It wouldn’t just be a time border, it would be a ticking time bomb under the proposed backstop arrangements which are contested.”

Keeping summer time will also strongly disadvantage countries in the north of Europe who will have darker mornings.

Previous attempts in Britain to help the economy in the south west of England by scrapping winter Greenwich Meantime has been strongly opposed by farmers and politicians in Scotland.

The proposal would put an end to daylight saving 22 years after it began, though the proposal still need to be signed off by the European Parliament and European Council.

Daylight saving was first introduced by Germany during World War I, and became a national policy in parts of the bloc during the 1970s.

It began as a way for member states to conserve energy.

The EU harmonised its timing system in 1996 to implement daylight saving.