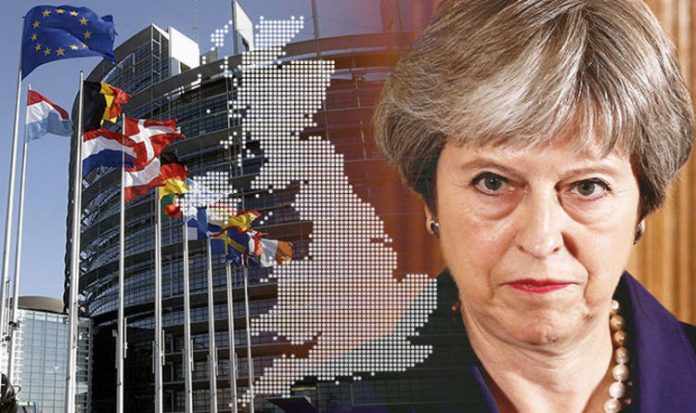 Approval scores rose as high as 55 percent in the first half of 2017, but have fallen sharply since.

The latest monthly Brexit tracker from ORB International, which quizzed 2,027 adults over the weekend and before the resignation of David Davis as Brexit Secretary, revealed 56 percent of voters are not confident the Prime Minister would get the right exit deal.

Just over a quarter (26 percent) thought she would get the right deal, while the remaining 18 percent were undecided.

This latest slump comes after the Brexit tracker showed a decline in confidence for the second successive month in June.

Only 36 percent approved of the way the Government was handling Brexit negotiations, while 64 percent disapproved.

Under half (49 percent) believed she not would get the right deal, 32 percent agreed that she would and 19 percent remained undecided.

Whether the UK would be better off continued to divide those surveyed, falling from 46 percent to 41 percent in June.

Commenting on the latest findings, ORB International Managing Director Johnny Heald said: “Theresa May has lost her Brexit Minister David Davis but she is also increasingly losing the confidence of voters.”

The latest blow to Mrs May comes as she faces a potential leadership challenge following the release of her Brexit manifesto, with letter calling for a no confidence vote in the Prime Minister mounting up.

Letters are being lodged with Sir Graham Brady, the Chairman of the 1922 Committee of Conservative backbenchers, ahead of a party showdown on Monday.

But Sir Graham declined to comment on Monday on whether he had received any letters from MPs calling for a no confidence vote on the Prime Minister.

He told the Press Association: “My view ever since I became chairman of the ’22 is that it would be entirely improper ever to comment in any way on that subject, because inevitably a commentary could influence the course of events.”

Leave MPs are furious at what they see as Mrs May’s caving in to demands from the Remain wing of the party to steer Britain towards a soft Brexit.