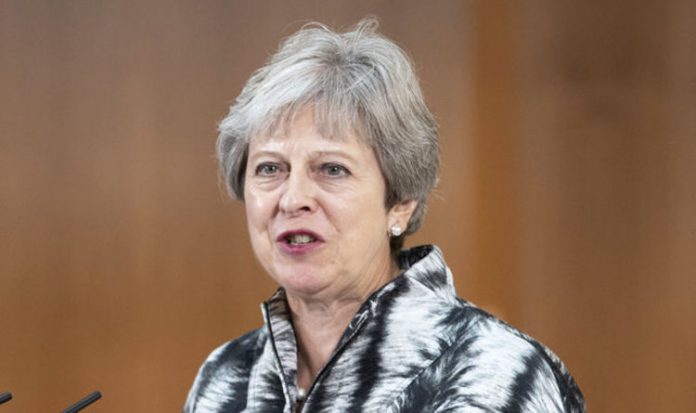 Stewart Jackson, who advised ex-Brexit Secretary David Davis, said Tory MPs were turning on Mrs May over her roadmap for leaving the EU.

And he warned she will face a leadership challenge by November unless she ditches the “incredibly unpopular” Chequers proposal.

Eurosceptics are furious at Mrs May’s plans because they would force Britain to keep obeying EU rules on trading goods.

And the UK could remain subject to rulings from the Luxembourg-based European Court of Justice (ECJ).

Mr Jackson told Express.co.uk: “The Prime Minister needs a way to climb down and admit the Chequers plan isn’t going to work.

“It’s incredibly unpopular – the EU hates it and the Tory party hates it – so she needs to wise up and start looking at other options.

“If she pushes through with this, it will cost her the premiership.

“She will have a terrible, fractious party conference later this month unless she realises people don’t want Chequers.

“I hope she sees sense by November and starts to change course, but she’s got a matter of weeks to be able to do that.”

Mr Jackson, who was the Tory MP for Peterborough between 2005 and 2017, also accused Theresa May of “lacking courage and imagination”.

In an outspoken attack, he said: “The Prime Minister hasn’t listened enough to her own MPs and the wider party.

“Instead, she’s following advice from a small group of civil servants like Olly Robbins, her Europe adviser.

“She’s backed herself into this terrible cul de sac with Chequers, and now it’s falling apart in front of her eyes.

“She has the opportunity to strike a Canada plus-plus deal: a comprehensive, unique agreement between the UK and EU.

“But the window on that is closing fast. She needs to get going.”

Speaking during a trip to Austria on Friday, Mr Hammond said: “I believe we will be able to get a deal.

“It’s very much in the interests of the EU27 as well as the UK that Brexit runs smoothly next March.

“Remember, this event is happening just eight to nine weeks before the European parliamentary elections.

“It’s not in anybody’s interest to have a Brexit without a deal. We will keep working very hard together and I’m sure we will get there.”