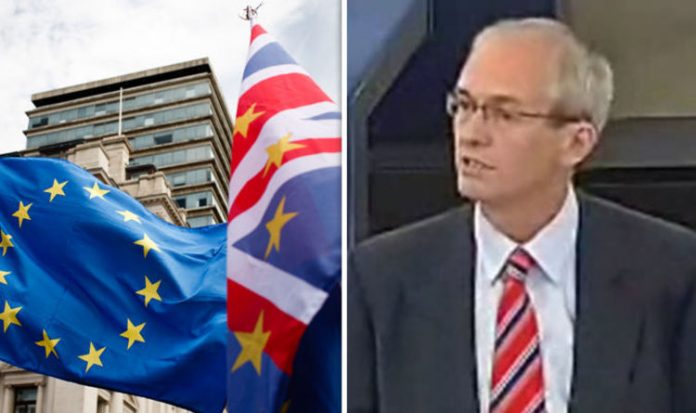 Richard Corbett, the Labour Party leader in the European Parliament, is on the ‘advisory committee’ for the People’s Vote, according to the Sun.

The group produced a paper launched this week entitled “Roadmap to a People’s Vote” that said: “The die is not irrevocably cast, there is still time and, until the UK has left the EU, the Article 50 letter can be withdrawn”.

The latest revelation comes after a cascade of other top Labour politicians appeared to either support or refuse to rule out a second referendum.

On Sunday, London Mayor Sadiq Khan said: “After careful consideration, I’ve decided the people must get a final say.

“This means a public vote on any deal or a vote on a no deal, alongside the option of staying in the EU.”

Sir Keir Starmer has described Mr Corbett, who sits on Labour’s National Executive Committee, as “effectively a member of my shadow team”.

Mr Corbett himself has claimed he is a de facto member of the Shadow Cabinet, helping to shape party policy, according to the Sun.

The People’s Vote Remain group claims it has found six chances for Britain to have a vote on the final deal with the EU, but Prime Minister Theresa May has dismissed this as a possibility.

She said “giving in” to calls for a second referendum would be a “gross betrayal of our democracy”.

Conservative Deputy Chairman James Cleverly said: “Instead of trying to make Brexit a success, Labour only want to frustrate the process.

“Re-running the referendum would take us al back to square one, and Labour must urgently rule out trying to delay Brexit.

“Only the Conservatives have a plan for a deal which will deliver on the result of the referendum by taking back control of our laws, borders and money.”

Mr Starmer responded on Twitter only to say that that the letter was nothing more than a “gimmick”.