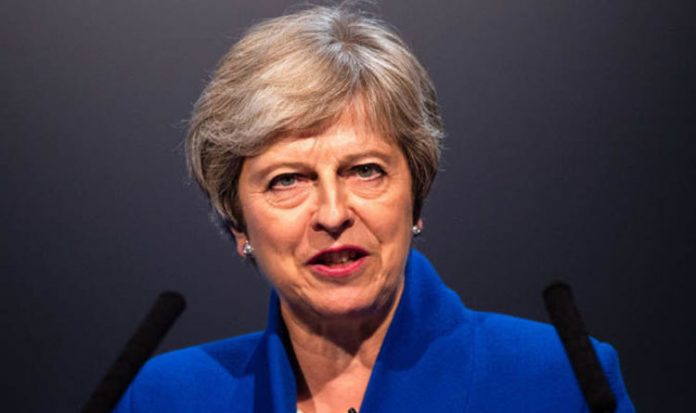 May vowed to deliver Brexit with no deal if the EU doesn’t negotiate (Image: GETTY)

And she dramatically raised her threat to walk away from the negotiating table, saying: “Let nobody be in any doubt that we are preparing for no deal.”

Her defiant tirade followed a blunt rejection of her blueprint for an economic partnership with Brussels from the leaders of the other 27 EU nations at a summit in Austria.

British officials had gone to the gathering in Salzburg expecting a warm endorsement of recent efforts to find a breakthrough in the talks.

Instead, EU Council President Donald Tusk told her that her Brexit proposals “will not work”.

The pair clashed during an ill-tempered “face-to-face meeting at the end of the informal EU summit and Mrs May emerged from the meeting pledging to not to back down.

She insisted her offer of a close economic partnership “remains the only serious and credible proposition on the table”.

The rejection of her blueprint – agreed by the Cabinet at her Chequers country retreat in July – is now expected to embolden Tory critics of the proposals at the party’s conference in Birmingham at the end of the month.

French President Emmanuel Macron, who was instrumental in persuading the other leaders to adopt a hard line against Britain, crowed that Brexit was proving far more difficult than Leave campaigners had claimed in the run up to the 2016 referendum.

“Brexit is the choice of the British people, pushed by those who predicted easy solutions,” he said, adding: “Those people are liars.”

German Chancellor Angela Merkel said “substantial progress” was needed over the next four weeks if the negotiations were to be saved.

But there were also signs of divisions over the bloc’s treatment of the UK.

“I don’t like the approach to punish the British just because they decided to leave,” he said. “It’s a great nation so we should have a fair approach and to have a good deal.”

‘If there are concerns from the EU, let’s hear what those concerns are’ (Image: GETTY)

Mrs May struggled to contain her rage as she tore into the EU in a news conference in a stuffy briefing room at the Mozarteum University where the summit was held.

Mrs May said: “I have always said that these negotiations were going to be tough and at various stages tactics would be used as part of those negotiations.

“What I’m focused on is delivering on the vote of the British people and delivering that in a way that ensures we deliver on our commitments of no hard border between Northern Ireland and Ireland and we do so by retaining the union of the UK and we protect jobs in doing that.

“The proposal we have put forward is the only proposal on the table that actually delivers on that sustainable future by offering free and frictionless movement of goods across borders.

How to keep the Irish border open post Brexit has become one of the trickier issues in negotiations (Image: GETTY)

Mrs May confirmed that her meeting with Mr Tusk had been “frank”, diplomatic code for a stand-up row.

The summit had failed to resolve the long-standing disputes about the Northern Ireland border and the future economic partnership between Britain and the EU, she admitted.

“On the economic partnership, there is no solution that will resolve the Northern Ireland border which is not based on the frictionless movement of goods.

“Our white paper remains the only serious and credible proposition on the table for achieving that objective.

“So there’s a lot of hard work to be done, but if the political will is there on the other side I’m confident we will reach a deal and to do is in the EU’s interests as well as the UK’s,” she said.

Turning up her threat to walk away from the talks, the Prime Minister said: “There’s a lot of hard work to be done, but I believe that there is a willingness to do a deal.

“But let nobody be in any doubt that, as I’ve always said, we are preparing for no deal so that if we get to the position where it is not possible to reach a deal then the British people would be confident that we would have done what is necessary to ensure we make a success of leaving the EU regardless of the terms on which we do so.”

Mrs May confirmed that her meeting with Mr Tusk had been ‘frank’, diplomatic code for a stand-up row (Image: GETTY)

Mrs May also repeatedly insisted the EU had failed to make clear its objections to her plan.

“If there are concerns about the proposal we’ve put forward for frictionless goods, let’s actually understand what those concerns are. I understand reference has been made to the integrity of the single market – actually, we believe we looked at that. We recognise the EU’s desire to respect the integrity of the single market and that’s why we’ve brought forward a proposal which we believe does exactly that,” she said.

Mrs May also promised to put forward fresh proposals to try to solve the issue of the so-called Irish “back stop”, a fall back arrangement to kick in if the issue of the border between Northern Ireland and the Republic cannot be resolved.

“We both agree there can be no withdrawal agreement without a legally-operative backstop. But that backstop cannot divide the UK into two customs territories. And we will be bringing forward our own proposals shortly,” she said.

Downing Street officials felt the Prime Minister had been ambushed by the EU at the gathering. Ahead of the trip to Salzburg, they had been expecting the summit to conclude with positive remarks about the progress of negotiations.

Instead, Mr Tusk claimed Mrs May’s plan frictionless trade in goods – agreed by her Cabinet at her Chequers country retreat – would wreck the EU’s single market.

“Everybody shared the view that while there are positive elements in the Chequers proposal, the suggested framework for economic co-operation will not work, not least because it is undermining the single market,” he said after the leaders of the 27 nations remaining in the EU after Brexit discussed the negotiations privately without Mrs May.

Mr Tusk also scrapped an expected announcement of a special EU summit in November to conclude a deal between Britain and the bloc.

He said the “moment of truth” in the negotiations would now come at the next full European Council meeting in October. That meeting would decide on whether to go ahead with the November meeting.

He added: “Today I am a little more optimistic when it comes to a positive outcome of our negotiations.

“Unfortunately we cannot at this stage exclude a no-deal – it depends on both sides of negotiations.”

“We were so ready to help,” said one official. They claimed the Prime Minister had been “aggressive” in her speech to the leaders on Wednesday evening which reiterated her threat that Britain was ready to leave with no deal.

Mrs May’s allies had expected a hard-line rejection of her plans from the EU as the Brexit negotiations neared their climax.

But they had not anticipated the rebuff coming so early ahead of the Tory conference. The Prime Minister is expected to face a backlash from the Tory opponents of her Chequers plan at the gathering.

Former EU Exit Secretary David Davis said: “It is clear what the EU tactics are now.

“Parliament was very unlikely to support Chequers, it certainly will not allow more than Chequers.

“Now is the time for the Prime Minister to reset the negotiation and take Tusk’s March offer of a free trade plus deal.”

Jacob Rees-Mogg, chairman of the European Research Group of Tory MPs, said  Mr Tusk had reinforced the objections to the Chequers plan set out by Mr Barnier.

“Everyone expected that there would be some softening of Mr Barnier’s line. That hasn’t happened, it has been made firmer,” he told BBC News.

“I think Chequers now has no supporters at all. I doubt even the Downing Street cat is any longer backing the Chequers plan.

“I think the time has come for Mrs May to say ‘This is not going to work’.”

Mrs May’s angry clash with the EU came on the 30th anniversary of Margaret Thatcher’s famous “Bruges speech” which first raised her concerns about the bloc’s lurch towards becoming a federalist super-state.

Many Euro-sceptics chart the late former Prime Minister’s address to the College of Europe in Bruges in 1988 as the starting point of the anti-Brussels movement that culminated in Brexit.