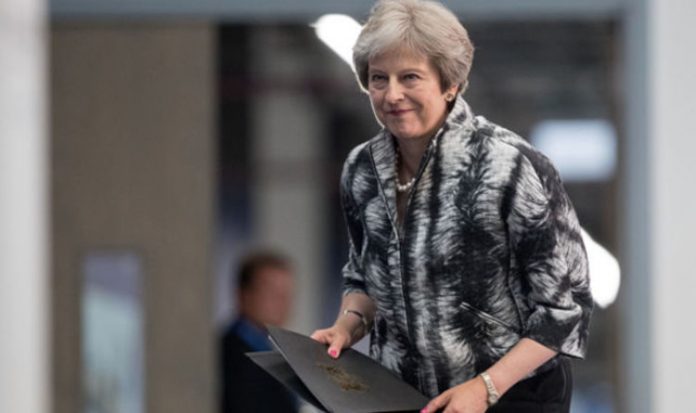 Mrs May’s blueprint for future relations, hammered out by ministers at her Chequers residence before two quit over its plan to keep close ties to EU rules, has already received a lukewarm reception in Brussels.

Reports have shown she still has a mountain to climb to win over her own party at home.

Maidenhead Tory party chief Richard Kellaway said he backed Mrs May and that a Downing Street briefing about the white paper “went down very well” and had “cheered him up”.

But the local councillor added: “I think we have reached the stage that if we don’t get a deal around these terms, then we’ll have to break away.

“If it were to be diluted it would ultimately not be acceptable”.

The chairman of Brexit-backing Commons Leader Andrea Leadsom’s party has reportedly warned the Government had “lost the sense of leaving” and wants Mrs May replaced by “a statesman”.

At least one minister has been accused of “betrayal” while other senior activists fear wipe-out at the next election if there is not a good deal.

Conservative MP Philip Davies told the Daily Express: “The more people see of the Chequers deal, the more they see that it doesn’t ensure we properly leave the EU.”

Borrowing former minister Ken Clarke’s description of Mrs May, Mr Davies added: “Whatever is proposed by the PM, the EU want more, and it is now time for her to discover her inner Bloody Difficult Woman and tell the EU that we have already gone too far and if they will not agree to an exit on free trade terms and nothing else, we will have no alternative but to walk away from the talks and leave without a deal.

Conservative MP Andrew Bridgen, who has submitted a formal letter to party chiefs voicing no confidence in Mrs May, warned: “The revolt in the party in the country over Theresa May’s Brexit betrayal is now reaching boiling point.

“Local Conservative associations are in uproar.

“Our grassroots activists, the bedrock of our party, want Mrs May to abandon her disastrous proposals or fall on her sword.”

He added: “It’s very telling that she’s even pushed her own local chairman to the very limit. And undoubtedly the EU will want further concessions.”

A Conservative HQ programme to win activists over to the plan will continue over the summer.

A Downing Street source said: “We accept we have to continue to make the argument, both in the UK and across Europe.

“We accept there is a debate to be had, but we are confident that as we continue to promote the deal that more people will understand that it not only respects the referendum but delivers for the whole UK.”

Insisting the PM was clear that ending free movement and the jurisdiction of the European court were “non-negotiable”, the source added: “This is the deal. There is no plan B. We’ve got to go out and keep making the case.”