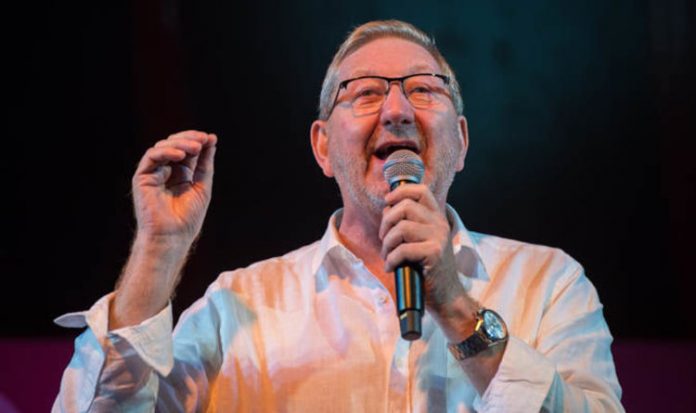 Delegates that the TUC supported a motion put forward by union boss Len McCluskey which keeps a second referendum “on the table”.

The motion was overwhelmingly agreed at the annual congress in Manchester along with a threat to “mobilise our movement politically and industrially to prevent” a no deal Brexit with the EU.

Despite saying that the 2016 referendum should be “respected”, the motion said: “Congress, recognising the real risk of a collapse in the talks, or a deal that does not deliver on the TUC’s priorities and, whilst respecting the outcome of the 2016 referendum, therefore calls for the option of a public vote to be kept on the table.”

In a further concession to Remainers, the motion also supported the option of staying in a reformed EU.

It said: “Congress also agrees that we must continue to fight for reform of the EU to promote the interests of workers across Europe.”

The words mirror Labour’s current policy of not directly promising a second referendum but leaving the option open to use at a later stage.

But it will put pressure on Mr Corbyn to move closer to promising another referendum as Remainers in Labour and the TUC push hard to reverse the historic Leave vote.

The threat means that leftwingers in the movement could coordinate a wave of strikes across the country in a bid to derail Britain’s hard won freedom from the EU.

Mr McCluskey, whose Unite union bank rolls Jeremy Corbyn’s Labour, said that while the TUC should not back a second referendum immediately, it should be kept on the table.

He told delegates: “I understand the argument for a so-called ‘people’s vote’ on the deal, on the deal – not on leaving the EU. That people’s vote has already happened.

“And I accept that option must be left on the table, if for no other reason than as a safety net if Tory MPs become spineless and don’t have the courage of their own convictions to oppose what the prime minister brings back.”

McCluskey accused the Prime Minister of trying to split the difference between “common sense and economic madness”.

He said: “She has been held hostage by a coalition of imperial nostalgics and free market fanatics whose vision is of a British society of the 1950s allied to the economic dogma of the 1850s.

“This would be all very funny if we were not being marched to the cliff edge, while, like Nero the cabinet fiddles.”

But delegates were warned that betraying the Brexit vote, which was delivered in 2016 in Labour heartlands, will hurt them and the Labour Party.

Mick Cash, leader of the Rail, Maritime and Transport union, spoke out against the idea of a people’s vote on the final Brexit deal.

He said: “The only vote that matters is a general election.

“We should be calling for one thing and one thing only – an urgent general election that returns a socialist Labour government led by Jeremy Corbyn and John McDonnell.

“We don’t need a people’s vote, we need a national vote that will sweep this rotten Tory government out of power.”

However, Manual Cortes, leader of the Transport Salaried Staffs association, said leaving the EU was too important to leave to politicians.

“People voted to leave. It should be the people who decide what exit means,” he said.