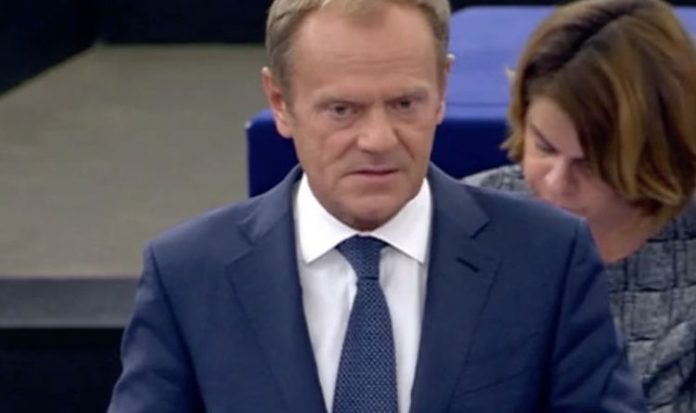 The EU’s most senior official posed the threat while briefing MEPs on last week’s European Council summit in Brussels, in which Brexit appeared as a insignificant footnote against migration and enlargement.

Leaders of the EU27 agreed that they should all express concern about the lack of progress on the Irish border as neither Brussels and Westminster have been able to reach an agreement on the so-called Irish backstop.

Brussels is insistent the mechanism must be included in the final withdrawal agreement in order to ensure Theresa May sticks to her pledge of not allowing a hard border to emerge on the island of Ireland after Brexit.

Westminster rejected the EU’s offering which would of seen Northern Ireland kept in the customs union and a goods border erected in the Irish Sea. Likewise, Brussels was not keen on the Prime Minister’s UK-wide, time-limited proposal, leaving talks deadlocked.

Mr Tusk has now said talks cannot continue any further than the Irish border debate until Britain comes up with an answer that pleases it’s European counterparts.

He told MEPs: “The 27 leaders shared one concern. While progress has been made in a number of areas, some key aspects still need to be agreed.

“Since there is much work ahead with less and less time, I was very honest in my assessment, including when I spoke to Prime Minister May last week.

“The sooner we get a precise UK proposal on the Irish border, the better the chance to finalise the Brexit negotiations this year.

“Put simply, we cannot make progress unless a solid backstop is presented by the UK and accepted by our Irish friends.

“We are now looking forward to the white paper from the UK and we very much hope it will bring the necessary clarity, realism and impetus to these negotiations.”

On the fringes of the summit, one EU diplomat revealed to Express.co.uk the current mood makes it less likely a Brexit deal will be reached by the next summit in October – the perceived next deadline for talks.

Mrs May was given an opportunity to brief her European counterparts at the summit, in which she gave a short presentation on the need for UK-EU security pact.

On Friday, the Prime Minister will host an away day for her divided Cabinet in an attempt to reach a consensus in order to release her highly anticipated Brexit white paper.

Mrs May will attempt to gain the approval of warring ministers in order to release the UK’s blueprint for a future relationship with the EU.