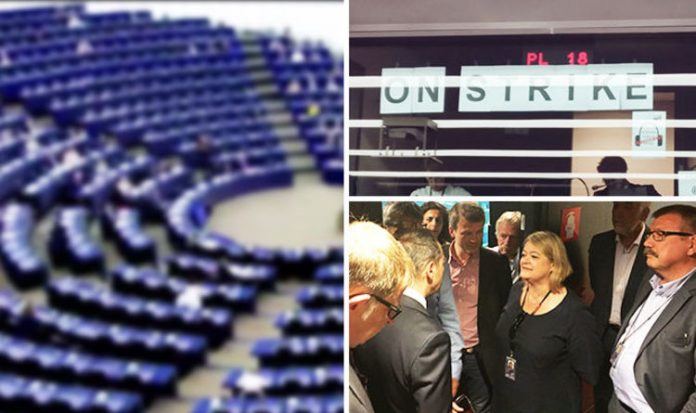 The EU employees at the European Parliament in Strasbourg are staging the first in a series of strikes over a long-running feud about changes to their working hours.

The interpreters, who give live translations of all parliamentary proceedings in the EU’s 24 official languages, are stopping work for up to two hours a day as they escalate their argument further.

Mr Juncker and European Parliament President Antonio Tajani are found rarely in agreement but found common ground to criticise MEPs who had helped delay the session in an act of solidarity with the striking interpreters.

A small group of the Euro MPs shut down the Hemicycle’s microphone system before blocking technical staff from coming to restore the working order.

Challenging the EU’s democratically elected representatives, Mr Juncker, the EU’ most senior official, said they would not have acted up if French President Emmanuel Macron or German Chancellor Angela Merkel had been in the chamber.

Thanks to the EU’s over-reliance on the need for translations across all of its events, the interpreters argument will likely be resolved soon or become a growing issue across the bloc.

Mr Tajani has been called to mediate on the long-running row after the collapse of talks with the institution’s administration.

Interpreters have accused Klaus Welle, the Parliament’s Secretary-General of unjust treatment after he imposed new working conditions without a formal consultations procedure.

Roberto Aquino, spokesman for the Parliament’s full-time interpretation staff, said: “The Secretary-General has imposed changes without agreement, breaching all consultation rules while not accepting any of our counter proposals.

Despite making numerous concessions to meet the changing needs of the European Parliament, management keeps moving the goalposts. They want to have their cake and eat it too.

“We want to set the record straight and ensure that senior MEPs hear interpreters’ views. We’ve been accused of resisting change, yet the hours worked in booths are higher than in the UN, and we are already doing more with less.

“It’s difficult to square the circle and have everything without solving other structural problems. We have put forward counter proposals but unfortunately the Parliament’s management have not been as forthcoming.”

French Socialist MEP Edouard Martin was one of the EU’s representatives to join the picket line.

He posted a video of a larger group of French MEPs blocking the doorway to what one of the translation booths overlooking the proceedings in Strasbourg.

Isabell Thomas, who was amongst the group, said: “This morning we blocked the European Parliament’s technical authority and shut down the microphones in support of the social demands of the interpreters.”