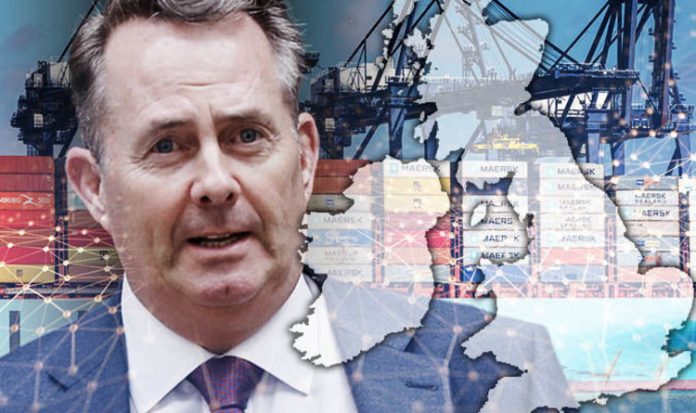 He will also commit minsters to a new ambition of ensuring exports account for at least 35 percent of economic output, up from the current level of 30 percent.

Dr Fox’s remarks will come in a keynote speech today to mark the launch of the Government Export Strategy designed to boost UK jobs and growth after the country quits the EU next March.

In his speech to business leaders in London today, the Tory Cabinet minister is expected to say: “The United Kingdom is a great exporting nation and our exporters lead the way, in creating jobs, raising wages and growing our economy.

“UK businesses are superbly placed to capitalise on the rapid changes in the global economic environment and I believe the UK has the potential to be a 21st century exporting superpower.

“As an international economic department, we are determined to support, connect and grow UK companies on the world stage through our international network.

“As we leave the EU, we must set our sights high and that is just what this Export Strategy will help us achieve.”

Dr Fox will say the Export Strategy will seek to show how the Government can work with businesses to encouraging more British exports.

Figures from the Department for International Trade show that UK firms sold goods and services overseas worth £620billion, around 30% of Britain’s GDP.

But the department estimates that 400,000 more UK firms could export overseas.

Trade minister Baroness Fairhead said: “Since its creation two years ago, DIT has already helped thousands of UK companies to export – with exports now at a record high.

“As the world’s sixth largest exporter, we do punch above our weight, however, we also punch below our potential. “

She added: “To achieve our aim, Government must join up across departments to enable UK companies to succeed overseas.

“This strategy is a first step – a foundation – for a new national drive to export.”

“This strategy is a timely signal that the Government is committed to improving the United Kingdom’s international competitiveness.”

Dr Adam Marshall, director general of the British Chambers of Commerce, said: “Working together, business and government have a real opportunity to turbo-charge UK exports, and help more of our firms increase sales and profits in markets all across the world.

“Our biggest competitors invest heavily in promoting their countries’ products and services, and the UK must match or exceed them.”

Mike Cherry, national chairman of the Federation of Small Businesses, said: “The Government’s Export Strategy is strong on aspiration. We welcome the commitment to increase exports as a proportion of GDP from 30 percent to 35 percent, as long as smaller businesses are front and centre of concrete new interventions that recognise the link between exporting, innovation and enhanced productivity. However, it’s concerning to see a lack of definitive, detailed interventions set out in the strategy.”