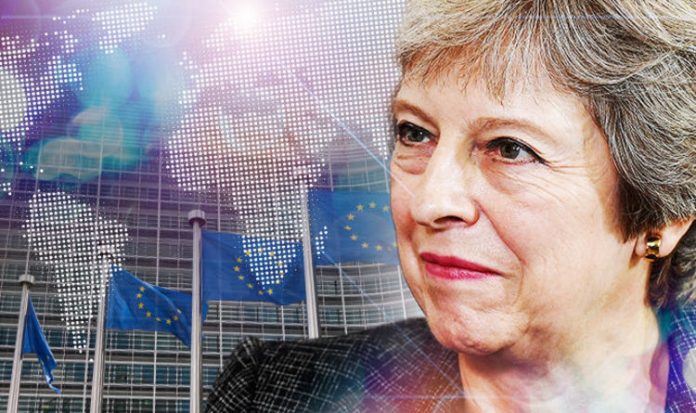 The move means that Britain is ready for a World Trade Deal where the UK relies on international rules instead of striking a formal trade deal with the EU and is free to make free trade agreements around the world as well as set its own regulations.

And it is a signal to the EU that the UK will not be bullied and is ready even if obstinate negotiators in Brussels led by Michel Barnier refuse to strike a fair deal.

The official action at the WTO comes as Theresa May has assured voters that Britain will be ready for no deal with the EU.

Speaking to Channel 5, she was asked about scare stories that the UK is having to stockpile medicines and blood supplies in preparation.

Providing reassurance, she said: “Well, far from being worried about preparations that we’re making, I would say that people should take reassurance and comfort from the fact that the Government is saying that we’re in a negotiation working for a good deal.

“I believe we can get a good deal. But actually it’s right that we say because we don’t know what the outcome is going to be, we think it’s going to be a good one, we’re working for a good one but let’s prepare for every eventuality.”

Pressed further on the issue, she said: “Look, this is not just about stockpiling that concept, what it is, is about making sure that we’ll be able to continue to do things that are necessary once we’ve left the EU, if we leave without a deal.

She also pledged to ensure that free movement from the EU will end whatever deal is struck.

Asked about her “non-negotiatiables”, she said: “An end to free movement. Being able to set rules for people coming here from inside the EU. Just as we can for people from outside the EU.

Despite criticism of her Chequers proposals, which some believe will leave Britain tied to EU rule, Mrs May also insisted that she is “committed to delivering Brexit.”

On Thursday at the Royal Welsh Show she will also promise the maintaining the highest standards on animal welfare.

She is due to say: “This Government is committed to supporting the half a million people who work in agriculture and growing our world leading food and drinks sector, which contributes over £100 billion to the UK economy. But we also need to protect the farmed environment for future generations.

“Leaving the EU presents us with a unique opportunity to transform our food, farming and environmental policies so we can have a healthy and prosperous agricultural industry that is fit for the future, and helps us to leave the environment in a better place than we found it.”

The tariffs schedule was announced by Julian Braithwaite, Britain’s permanent representative to the WTO in Geneva.

He Tweeted: “Delighted the UK’s WTO goods schedule is being circulated today formally to all WTO members for certification. It seeks to replicate the concessions and commitments applicable to the UK as part of the EU today. An important milestone as we prepare for our departure from the EU.”

The action is part of Britain taking its seat at the WTO again once it leaves the EU.

Currently, the UK is not an independent member because the European Commission represents all EU members on the body which sets international rules.

For the UK to agree new free trade deals with the EU or other countries after Brexit it needs to retake its seat.

Tory MEP David Campbell Bannerman, who is a trade expert and sits on the European Parliament committee for trade, said: “This is a very welcome and significant step.

“It shows that Britain is ready for all outcomes including a World Trade deal and even more importantly will be an independent trading power again.

“It’s ridiculous that the country that invented modern international trade does not have a seat at the WTO currently.”