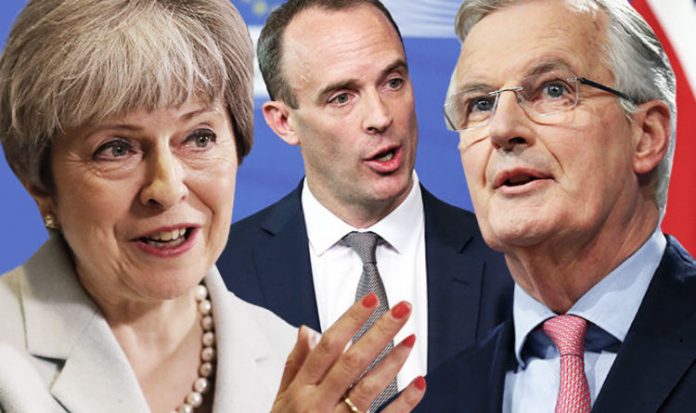 Brexit news: Preparations for a no-deal Brexit are being ‘stepped up’, Dominic Raab has warned EU (Image: GETTY)

In a softening of his tone in the EU departure talks, the European Commission President suggested the Prime Minister’s Chequer’s plan could be the “starting point for such a partnership”.

He also promised: “The UK will never be an ordinary, third country for us. The UK will always be a very close neighbour and partner, in political, economic and security terms.”

His remarks, in his annual “state of the union” speech to the European Parliament in Strasbourg, were being seen in Whitehall as a further sign that EU negotiators are ready to engage on the details of Mrs May’s proposals.

But they also raised concerns among Euro-sceptic Tories that the Prime Minister will be forced into further compromises with the EU.

Mr Juncker also used his speech to repeat the EU’s “red lines” in the Brussels talks.

“We respect the British decision to leave our Union, even though we continue to regret it deeply.

“But we also ask the British Government to understand that someone who leaves the Union cannot be in the same privileged position as a member state.

“If you leave the union, you are of course no longer part of our single market, and certainly not only in the parts of it you choose.”

Mr Juncker said the European Commission wanted to find “a creative solution” to solving the dispute about the future of the border between Northern Ireland and the Irish Republic.

“It is not the European Union, it is Brexit that risks making the border more visible in Northern Ireland,” he said.

“In the past months, whenever we needed unity in the Union, Britain was at our side, driven by the same values and principles as all other Europeans.

“This is why I welcome Prime Minister May’s proposal to develop an ambitious new partnership for the future, after Brexit.

“We agree with the statement made in Chequers that the starting point for such a partnership should be a free trade area between the United Kingdom and the European Union.”

EU negotiators were ready “to work day and night to reach a deal”, Mr Juncker said.

“We owe it to our citizens and our businesses to ensure the UK’s withdrawal is orderly and that there is stability afterwards. It will not be the Commission that will stand in the way of this, I can assure you of that.”

The EU has frequently claimed a no-deal Brexit will hurt the UK more than Brussels (Image: GETTY)

Mrs May responded to Mr Juncker’s speech by insisting the UK would not treat the EU as an “ordinary third party” after Brexit.

She added: “When we leave the European Union, we will be an independent sovereign state—we will have control of our money, our borders and our laws—but I want to say to our closest allies in Europe – You will also never be an ordinary third party for us.”

Earlier this week, Mr Barnier claimed a Brexit deal was “possible” within six to eight weeks.

But he will today send another signal that Britain will be prepared to quit the bloc without a deal next year if talks fail to make progress.

His Whitehall department will release around 30 technical notices more setting out measures the Government, businesses and households should take to be ready for the outcome.

Ahead of the release of the documents, the Tory Cabinet minister said last night: “With six months to go until the UK leaves the European Union, we are stepping up our ‘no deal’ preparations so that Britain can continue to flourish, regardless of the outcome of negotiations.

“These technical notices are part and parcel of our sensible, pragmatic approach to preparing for all outcomes.

“Getting a deal with the European Union is still by far and away the most likely outcome, and I will continue to champion our Chequers proposals with Michel Barnier as the best way of securing the deep and special partnership we want with the EU.”

Mr Raab published a first batch of technical notices on no-deal Brexit preparations last month and more are to follow. In total around 84 are due to be published.