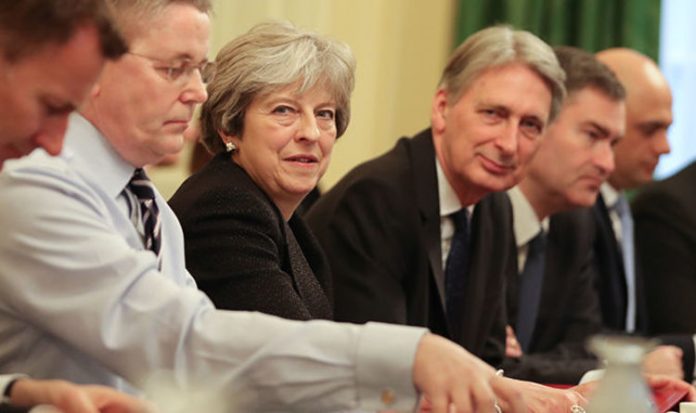 Ministers are due to meet tomorrow to thrash out an agreed stance on the UK’s relationship with the EU once it quits the bloc next year.

Prime Minister Theresa May is battling to hold her cabinet together, with deep splits between Brexiteers such as Foreign Secretary Boris Johnson and Environment Secretary Michael Gove, and Remainers such as Chancellor Philip Hammond.

She is expected to unveil a “third way” option to deal with customs arrangements and the border between Northern Ireland and the Irish Republic, as opposed to the customs partnership, which would involve the UK collecting tariffs on behalf of the EU, and the so-called maximum facilitation, or max far option, which would aim to do away with the need for physical border checks using modern technology.

A White Paper to be published next week will lay out what the Government wants Britain’s future relationship with the EU to be like, prior to the EU (Withdrawal) Bill going before Parliament.

Now it has emerged that a second document is in the pipeline aimed at creating a legal framework to put the proposals into action.

“The Bill will only be introduced once the negotiations have concluded and Parliament has approved the deal.

“We will be publishing a White Paper in the coming weeks setting out more details on this Bill.”

Plans for the new Bill was outlined on November 13 last year.

A statement carried on the Government’s Gov.uk website explained that the major policies set out in the Withdrawal Agreement would be directly implemented into domestic law by primary legislation – not by secondary legislation under the EU (Withdrawal) Bill.

This will allow for Parliamentary scrutiny and oversight of the process.

The Bill is expected to cover the contents of the Withdrawal Agreement, including issues such as an agreement on citizens’ rights, any financial settlement and the details of an implementation period agreed between both sides.

The Secretary of State for Exiting the EU David Davis said: “We have always said we will do whatever is necessary to prepare for our exit, including bringing forward further legislation, and that is exactly what we are doing.

“This is another important step that demonstrates our pragmatic approach to getting our house in order as we leave the EU.

“By announcing this Bill, we are providing clarity and certainty – both in the negotiations and at home – about the final agreement being put into UK law.

“As we move forward, we stand ready to work with MPs from across the House to ensure a smooth, and orderly exit from the EU that is effectively scrutinised by Parliament.”