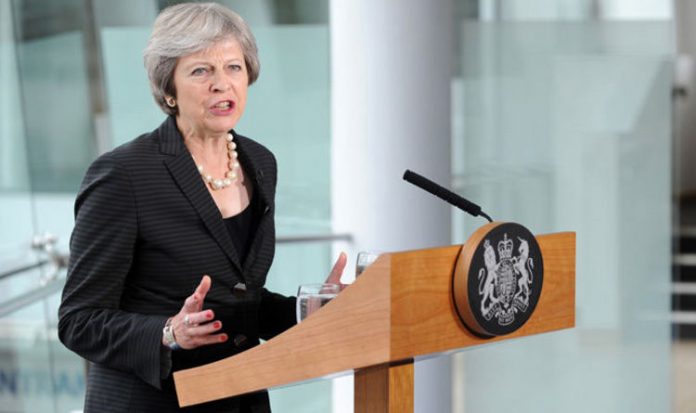 It also claimed that the deal would see the ECJ rule on the backstop solution to the Northern Ireland border question meaning that regulations linked to the issue would be ruled on by the foreign court in Luxembourg.

It is widely feared that senior Whitehall mandarin Olly Robbins, who heads the Downing Street EU unit, is making concessions without proper scrutiny or transparency.

The reports appeared to feed into the concerns that Mrs May’s so called red lines on Brexit including no jurisdiction by the ECJ are being wiped out by civil servants.

But it was believed that this Mr Robbins, who has been previously branded a Remainer in government, is now conducting Brexit policy.

Addressing the reports that a private deal on allowing the ECJ jurisdiction has been made, former Brexit minister David Jones warned that it was “completely unacceptable.”

He told the Daily Express: “It would mean that the supreme judicial authority in the UK was a foreign court.

“Ending the jurisdiction of the ECJ has always been one of the Prime Minister’s negotiating red lines and I am sure that she will stick to it.”

Jacob Rees-Mogg, the leader of the powerful European Research Group (ERG) of about 60 tory MPs, has warned previously with the controversial Chequers plan that Mrs May’s red lines are becoming “pinker” and will turn the UK into a “vassal state”.

He said: “If it has privately conceded it will need to unconcede publicly..

“The ECJ can only rule on EU law and must have no role in what would be an international dispute.

“Arbitration by an independent body would be reasonable but we can no more accept ECJ jurisdiction than the EU would accept ours.”

Former Tory leader Iain Duncan Smith said the proposal would be akin to a UK citizen living in America and having their rights protected by a British court.

Another leading Brexiteer Sir Bernard Jenkin, the chairman of the public administration and constitutional affairs committee, warned that such a deal would have “profound implications” for Britain.

He said: “It is giving status to the ECJ in the withdrawal agreement that is not accorded to the Supreme Court in the UK.

“That makes a deeply unequal relationship and therefore unacceptable.”

However, Downing Street has fiercely denied suggestions that a deal has been made.

A spokesman for the Prime Minister said: “We don’t recognise that.

“We set out our position in December in relation to these matters. It remains the case. Obviously, there is an ongoing negotiation.”