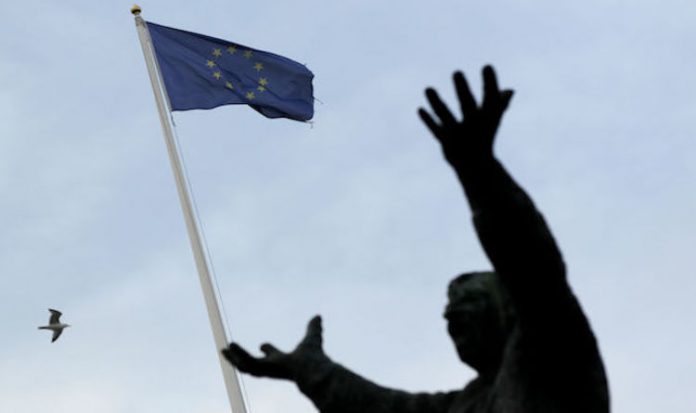 Six envoys from the EU’s founding member states Belgium, France, Germany, Italy, Luxembourg and the Netherlands wrote an internal joint analysis of the state of Ireland to both Dublin and Belfast and wrote of a “completely changed Irish society”.

The Northern Ireland peace process was typified by the Good Friday Agreement of 1998.

But the 4,000-word document, written ahead of the Pope’s visit to Dublin last month, comes as fresh arguments over the Irish border rage on ahead of Brexit, with mounting fears that the UK would leave the block without a deal in March of next year.

The document states: “The Irish border question needs to be answered” ahead of UK’s exit from the bloc.

It says Brexit has provided an opportunity “to look back and try to understand” the reshaping of “the open, dynamic, cosmopolitan Ireland we know today”.

The internal document read: “With Brexit, old ghosts from the past come back to haunt the Irish island and questions that no longer deemed relevant have come back to the forefront again. This is illustrated in particular by the border question.”

‘The future of Northern-Ireland and its relation with Ireland strongly depends on the final Brexit deal.

“With the ongoing negotiations, people are less inclined to say that a united Ireland will not happen in their lifetime.

“A bad deal for Northern-Ireland can speed up the process towards a possibly united Ireland. With a bad deal the North can lose both of its most important revenue streams, the all-Island economy and UK as well as EU subsidies.

“Plus, by 2021 demographics indicate a decisive change: the majority in NI will then be of Catholic faith.

“This could trigger people to rethink and change their opinion on the possibility of a united Ireland. Crucial questions would have to be answered: How to accommodate those who feel British? How to incorporate the many differences (as a most recent example: different abortion laws).

“And: any reunification would be financially extremely costly for the Irish State. Sensible, transparent and accountable decisions are vital for Northern-Ireland and the country as a whole, because of the delicate balance regarding the Northern-Irish peace project.”

The document also highlighted the declining authority of the Catholic Church in the country, with people seeking to find a new balance in day to day life away from the influence of religion.

It also said that citizens across Ireland “have started to think for themselves and had other options than dependence on faith”.

On Tuesday, it was announced that a radical new political party has been formed in the Republic of Ireland.

The Irexit Freedom party, which is set to be launched in Dublin next Saturday, wants Ireland to “take back control” from Brussels.

The party plans to run candidates in next year’s European Parliament elections and the 2021 Irish general election.

The party describes itself as a “national movement” and is also calling for reduced taxation and to curb wasteful government spending.

It also plans to “achieve the consent of the voters in the North” for a united Ireland.