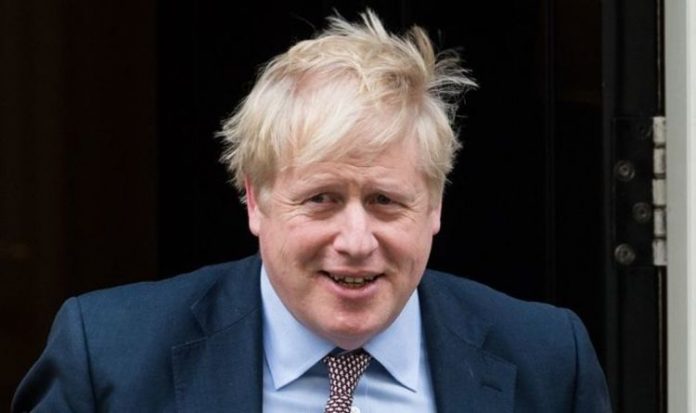 Brussels, and in particular EU Commission President Ursula von der Leyen, sparked outrage last week after threatening to invoke Article 16 of the free trade agreement. Although rescinded, the move would have enforced checks on vaccine supplies going between Northern Ireland and the Republic – despite the EU’s insistence throughout Brexit talks not do so. With the EU now in crisis from the fallout of the vaccine threat, Lord Charles Moore has called on the Prime Minister to capitalise on Brussels’ monumental mistake.

Firstly, Lord Moore explained how the EU’s vow to maintain free and seamless trade without a border on the island of Ireland was not true.

Throughout Brexit talks, the EU persistently warned a hard border could not be created on the island of Ireland due to the Good Friday Agreement.

This claim centred around the imposition of the UK Internal Market Bill – but after the vaccine threat last week, Lord Moore claimed that desire no longer stands.

He said: “We therefore now know that the EU’s constant insistence that it will never impose a border between North and South is not true.”

Secondly, Lord Moore claimed the threat to impose Article 16 of the Northern Ireland protocol revealed the EU does not want to protect the Good Friday Agreement.

Although the row over the supply of vaccines did not involve Northern Ireland and the Republic, Lord Moore hinted the EU may not prioritise the peace process when it comes to trade going forward.

Not only did the EU throw the peace process in jeopardy but Brussels failed to notify the Republic Ireland, a member state of the bloc, of its intent.

This sparked fury from the Republic with both Irish Taoiseach Micheál Martin and Foreign Minister Simon Coveney expressing their outrage and insisting the mistake does not happen again.

Lord Moore said: “Imagine the global outcry if Britain had done the same.

“On this occasion, Boris Johnson and the Irish prime minister, Micheál Martin, were essentially on the same side, both telephoning Ursula von der Leyen to get her off her high horse.

Brexit news: The UK surged ahead with its vaccination prgramme (Image: GETTY)

Lastly, Lord Moore claimed the fiasco gives the UK a strong hand in trying to disentangle itself from the raft of checks brought in post-Brexit.

At the start of talks, then-Prime Minister Theresa May claimed there can never be any form of a border between the north and south.

However, with the EU ready to take such a hard-line stance, the UK may well be able to reduce the checks needed surrounding the border down the Irish Sea.

The threat to invoke Article 16 was sparked over a vaccine shortage to the EU.

AstraZeneca, who produced their drug with Oxford University, revealed there will be shortages due to supply chain issues experienced at its plant on the continent.

In response, the EU demanded vaccine supplies must be reverted to the continent in order to fulfil its contract with the company.

Brexit news: The Eu has struggled with its own vaccination programme (Image: GETTY)

The company, however, refused this request thus sparking the EU’s threat to impose checks to effectively stop EU-made vaccine entering Northern Ireland, and therefore the rest of the UK.

Although both sides have come to a compromise, vaccine supplies will now need a customs-exit declaration and the EU Commission must be verified of any export to reveal how much, where and what is leaving the bloc.