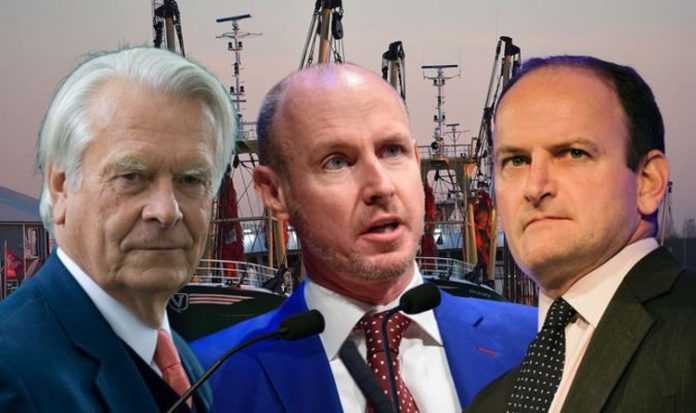 The EU’s chief Brexit negotiator Michel Barnier has announced Prime Minister Boris Johnson has lowered his demands on Brussels by asking for up to 60 percent of catches in UK waters back from EU fishing fleets. As he briefed ambassadors and members of the European Parliament yesterday, Mr Barnier said Downing Street had revised its demand down from 80 percent. The EU has so far offered the repatriation of only 15 percent to 18 percent of fishing catches.

He conceded that it was unclear whether the divide could be bridged in the time remaining.

The French politician said: “As issues stand, it is not possible to say if a deal will be there.”

While many wonder whether Mr Johnson’s concession will be the first one of many, Vote Leave insiders have told Express.co.uk why this will not be the case.

Former Conservative MEP Daniel Hannan told Express.co.uk that British fishermen should not worry, as Mr Johnson will undoubtedly give them back control of their waters and reverse Edward Heath’s betrayal.

The former Tory Prime Minister is known for being the man who took Britain into the European Club in the Seventies.

This, however, is about to change.

The prominent eurosceptic and Vote Leave founder said: “I don’t think there is any chance that we will now not insist on the sovereignty of our territorial waters.

“Before we joined the EEC we always had bilateral and multilateral agreements with our neighbours like every other country in the world does.

“If fish spawn in the waters of one country, reach maturity in another, of course those two countries will get together and agree a quota system that they can both share and benefit from.

Mr Hannan noted: “But it will be on the basis that we are a sovereign country, making agreements with our neighbours rather than on the basis that North Sea fish stocks are a common resource to which all members have equal access.

“Boris Johnson has been very clear about that.

“We will take back sovereignty as allowed under maritime law.

He said: “Trying to make fishing as part of the FTA – I don’t think that has ever been done before and it is certainly provocative.

“Of course, we will allow many EU countries in UK waters but we will do it like Norway does, as an independent country.

“I don’t think Brussels has understood that we are going to be separate now, but we will be able to overcome that.”

Lord Owen added: “Edward Heath traded in our waters, and that was an absolute scandal.

“Some people point out that fishing is a small part of our overall economy, which is completely true but that doesn’t matter.

“This Government in particular has sworn that it will not do what Ted Heath did, so there is no chance whatsoever we will cave in to Brussels’ demands.”

Former Ukip MP Douglas Carswell agreed with his Vote Leave colleagues, but suggested one way Mr Johnson could compromise to reach a deal.

He said: “It may be possible to do a phased deal on fisheries.

“It may be possible to say ‘it is an adjustment process for everyone, so let’s phase the arrangement over a period of three to four years.’

“I think most British eurosceptics would accept that if the end goal was national sovereignty and if we got there in a way respectful to the environment.

“It could be done in a phased way, yes.