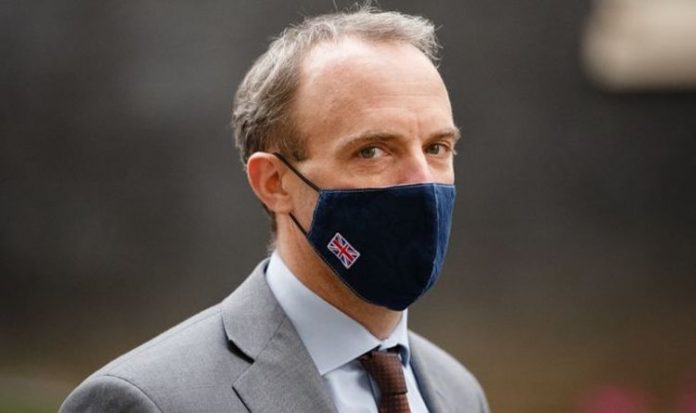 Foreign Secretary Dominic Raab spoke out after it emerged most UK residents will face restrictions on visiting the 27 EU countries from January 1, when rules permitting free travel within the bloc cease to apply to Britons. Non-essential visits to the EU by UK citizens may well be hit by the new curbs, conceded Mr Raab.

But he played down the impact, saying coronavirus restrictions would depend on what Brussels and its member states decide post-December 31.

He said in a BBC interview: “Covid restrictions will depend on the combination of what the EU decides, but also member states.

“We have already got challenges with that and we have put our own restrictions in place.”

An earlier statement issued by a Government spokeswoman said: “We take a scientific, risk-based approach to health measures at the border and it is of course in the interests of all countries to allow safe international travel.”

A spokesman for travel trade organisation Abta said: “Individual countries are able to implement their own measures, including options like travel corridors and testing.”

Paul Charles, head of travel consultancy The PC Agency, said: “I cannot believe EU countries who rely on the spending power of UK business and leisure travellers will seek to block entry. Cool heads need to prevail as travel and tourism is such a key contributor to economic growth in Europe.”

Meanwhile, Mr Raab said he was “not concerned” about potential food price rises or shortages if the Government fails to strike a trade deal with the EU.

Retailers and industry experts have raised concerns about increased costs and difficulties getting produce to the UK from January 1 without a deal.

Tesco chairman John Allan has warned that food bills could climb by five percent on average in the event of a no-deal Brexit and said the supermarket has already begun stockpiling in case of problems after January 1.

The Food and Drink Federation’s Ian Wright told MPs this week that “we can’t be absolutely certain about the movement of food from EU to UK from January 1” due to border checks and tariffs.

But Mr Raab told the BBC that tariffs – which will be levied on imports from the EU if there is no free trade deal – played only a small part in the cost of food.

He said that Mr Allan’s warning of a rise of up to five percent on a shopping basket was not a figure the Government recognises.

“Of all the things that will be a challenge, I am not concerned about either supermarket cupboards running bare or the cost of food prices,” he said.

“Equally, there will be some bumps along the road if we don’t get a free trade deal, that’s the inevitable consequence of change.

“But we will be well braced and well prepared to deal with those and we are going to make a success of leaving the transition period, come what may.”