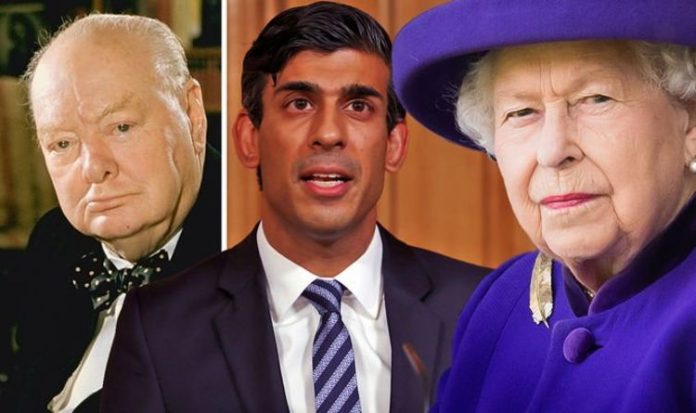 The Queen is financed through the Sovereign Grant, which is a Government-allocated portion of the funds raised through the Crown Estate. It’s used to finance her official duties. The monarch will reportedly see a £30million shortfall in profits this year, as the pandemic delivered a huge blow to the tourism sector. Chancellor Rishi Sunak will be looking for ways to restore the economy after two lockdowns have brought about a recession — and the public has been wondering if new measures of austerity could be introduced.

A glance back at other financially challenging eras within the Queen’s reign could provide insight into how the Government may respond to the Royal Family’s fall in profits.

For instance, after World War 2 the British economy was in tatters.

Winston Churchill was the first Prime Minister the Queen worked with after she ascended the throne in 1952.

They had a close relationship and he had “near idolatry” for the new monarch, according to politician Roy Jenkins.

Mr Churchill decided she could be only the second sovereign in modern royal history to be exempt from paying income tax to help the monarchy cope after the war.

Journalist David McClure noted: “The Government of Winston Churchill must have calculated that in those austere times, when wartime-like rationing was still in place, it could keep the Civil List down if it granted the new monarch tax breaks so that she would have extra money in her private purse to fund some of her public expense, which otherwise would have been paid for by the taxpayer.”

Her father King George VI had been the first royal to be exempt from paying income tax as compensation for the “financially ruinous abdication settlement” he had to pay after the Duke of Windsor voluntarily left the throne.

Writing for Town & Country, Mr McClure explained that George “had to pay much of the Duke of Windsor’s large annuity out of his own pocket”.

As the years went by, her tax would have grown — meaning the waiver became increasingly valuable.

However, as the next recession rears its head, it’s not clear how the Royal Family intends to tackle the loss in profits and assist the nation where it can.

Independent tax adviser David Lesperance told Express.co.uk that it was unlikely Boris Johnson’s Government would grant the Queen the same tax waiver as Mr Churchill had.

He suggested that while some royalists within Parliament may want to waive such taxes for the Queen to help the monarchy recover in the short-term, such a move could set a dangerous precedent for future sovereigns.

He said: “It ultimately comes down to a benevolent monarchy versus a parliamentary democracy.

“You have a benevolent monarch like Elizabeth, or as I suspect Charles will be, you will have somebody who is looking beyond the next non-confidence vote [or general election], beyond the immediate, and into the long-term ramifications.

“Whereas, if you are a politician, particularly in a parliamentary system, you will govern for four or five years, or until your no-confidence vote.

“So you have to have much more of an eye on the short-term, you can’t ignore it for long-term goals.”

He also speculated that the public may want the waiver to change according to the personality of the monarchy, how popular they are or how benevolent they are.

But, Mr Lesperance noted, the tax waiver would not have necessarily been a good idea if King Edward VIII — later the Duke of Windsor — had been on the throne, as he did not have a reputation for being thrifty and may have taken advantage of such a concession.

“Democracy is everything” and a monarch should be above such party politics, the tax adviser explained.

Mr Lesperance’s implication was that Mr Churchill’s method would not be the best method to help the Royal Family get back on its feet.

He also called for more transparency with the royal finances, which is much easier if the Queen pays taxes.