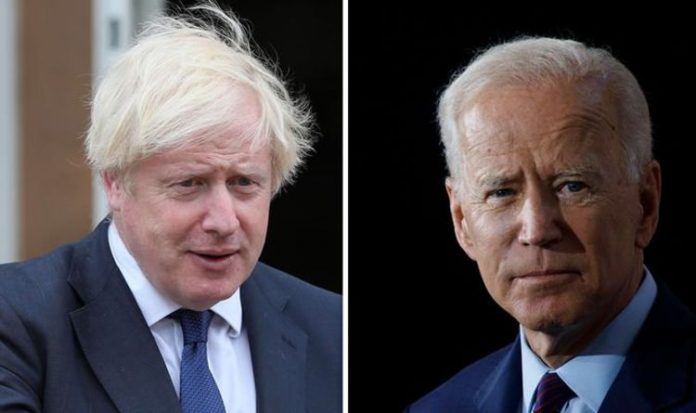 Recent polls suggest Joe Biden is in a good position as he looks to beat Donald Trump in November’s US election. In a poll that was taken during the Republican National Convention, the Democrat candidate boasted a nine-point lead as the US President struggles with the economic crisis sparked by the coronavirus pandemic. The result of the US election could have a significant impact on the UK’s post-Brexit success, especially given Mr Biden’s comments about the UK’s withdrawal from the EU. During the Brexit process, he said that US interests in the UK are “diminished” because of the country’s decision to leave the EU.

Mr Biden, speaking in October 2018, also noted the frequently lauded ‘special relationship’ between the US and UK, hinting that it could suffer after the UK leaves the bloc – as it did on January 31.

Biden added: “There is a special relationship – we’ve been locked cheek to jowl on almost every important issue.

“Without England being totally integrated, to the extent that it’s distant, diminishes our ability to have influence on events on the continent.”

Prime Minister Boris Johnson appears to be planning for life after Trump as his government has entered talks with Democrat officials.

Downing Street officials have been speaking with allies of Mr Biden to try to win him over and avoid trade deal talks losing momentum should the current president lose.

Trade minister Greg Hands told The Times last month that ministers “never strategise around elections” but added: “We do make sure for the overall UK trade agenda that we maintain bipartisan support in the US political system.”