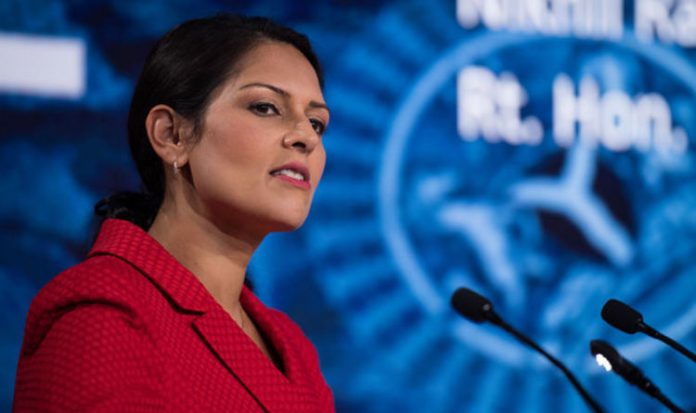 And former cabinet minister Priti Patel has hailed the findings as proof that patience is wearing thin, with people “sick to the back teeth” of “bullying Brussels”.

International Trade minister Liam Fox earlier this month put the chances of a “no-deal” Brexit at 60-40.

And the survey, suggested 40 percent of recipients are unfazed by the prospect, believing we should leave in 222 days’ time as planned whatever happens.

More than half – 55 percent – are against a second referendum, while 48 percent believed the political classes were making heavy weather of Brexit in the hope that the public changes its mind.

However, the poll says 62 percent say they have not changed their minds since the first vote.

The survey also suggests that more Remainers have changed their mind – 15 percent against Leavers at 11 percent.

If this was replicated in a second referendum, it would be equivalent to 2.4 million and 1.9 million respectively.

Ms Patel, former minister for International Development, said: “It is clear that most people are sick to the back teeth of being ­bullied by the EU and listening to politicians at home erecting all kinds of obstacles to prevent them honouring the referendum result.

“The Government should sit up and heed the results of this poll.

“That means being tougher in negotiations with Brussels and doing what the nation voted for — to get Britain out of the EU.”

Martin Boon, director of Deltapoll, which carried out the research on behalf of the Sun on Sunday, said the findings show most people are taking a tougher stance on Brexit.

He added: “Half the public believe themselves to be under siege from the political classes trying to change their minds.

“But the message they are sending back is that they haven’t changed their minds and the likelihood is they won’t.”

The findings of the latest poll follow another study unveiled by ComRes this week which suggested that 52 percent voters in Labour-held constituencies would consider backing a single-issue party committed to leaving the EU “as quickly and as fully as possible”.

The online research, which canvassed the views of 10,000 people, was commissioned by the eurosceptic Brexit Express campaign group launched by financier Jeremy Hosking in 2016.

He commented: “This polling reveals that no matter where voters’ political allegiances lie, they are deeply disappointed by the response of the main parties to what was a clear democratic instruction.

“The polling also reveals that the narrative constructed by our political class to explain the result bears no examination, nor are the public fobbed off by spurious excuses to run the referendum again.

“In this, as in so many things, the British party political system looks bereft of ideas, baffled by democracy and bankrupt on accountability.

“Brexit Express is ready to step in to help ensure no backsliding on Brexit and an end to the vindictive culture wars that have been declared on ex-metropolitan Britain.”

Deltapoll’s online survey involved an online sample of 1,904 adults aged 18 and over who were interviewed between August 14 to 16.