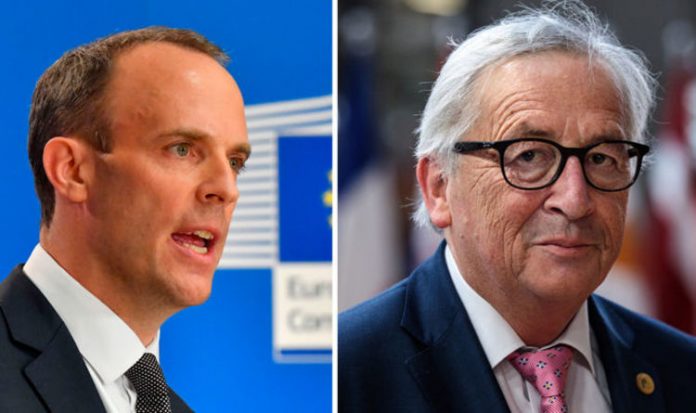 This launch of 84 papers comes as Dominic Raab is due to give a speech on Thursday setting out the Government’s plans for a no-deal Brexit.

The papers will show companies how it works now and how it will work in the possible no deal scenario.

The UK will adopt a “flexible” approach to ensure that important items, such as EU medicines, car parts and chemicals are sill available in the UK.

An industry source told The Sunday Telegraph that that plans are “project no fear”.

The UK’s international trade secretary, Liam Fox, has said that there is a 60 percent probability of the UK leaving the EU without a deal.

However, Foreign Secretary Jeremy Hunt has described a no-deal Brexit as a “mistake we would regret for generations”.

The plan shows a constructive way that the UK is able to continue trading wit h the EU following a no-deal Brexit.

Regarding medicines, the paper said: “the UK regulator would take steps to keep market access for importers open to avoid disruption”.

Mr Raab said: “It is the responsibility of the EU to ensure its consumers and businesses are not harmed.

“The UK Government believes this is best achieved by both sides taking a non-disruptive approach and will be encouraging cooperation with the EU on no-deal planning.

“Securing a deal is still by far the most likely outcome, but we want to make sure that we clearly set out the steps that people, businesses and public services need to take in the unlikely even that we don’t reach an agreement.

“It is the responsible thing for any government to do, to mitigate the risks and make sure the UK is ready to make a success of Brexit”.