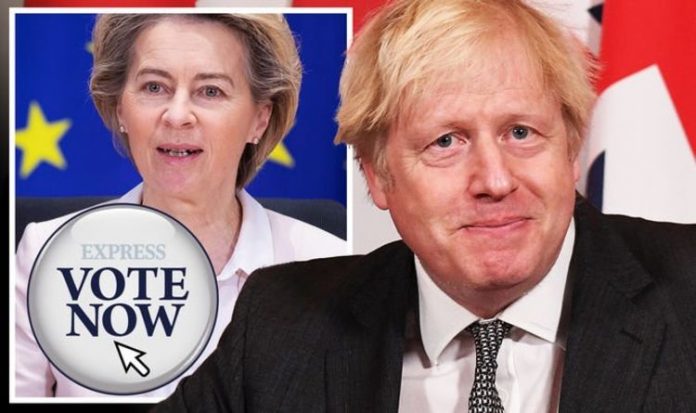 With Brexit soon to be complete and the referendum being held four years ago, some Remainers such as Labour peer, Lord Andrew Adonis have declared they will lead the charge to get the UK back into the EU. Other groups, such as The New European magazine, will also be holding gatherings tonight to mourn the UK’s departure from the EU. However, after so many years of negotiating the UK’s departure, should the Prime Minister introduce a law to stop Britain from re-joining the bloc.

Therefore, in today’s exclusive Express.co.uk poll, we’re asking ‘Should Britain be banned from re-joining the EU for 50 years?”

Speaking after the UK and EU agreed to the Trade Reduction Treaty, Lord Adonis claimed Britain must seek to re-join Europe.

He told Sky News: “The people who promised us Brexit in 2016 said that we could have Brexit without having the red tape.

“Now it’s clear that we’ve got the red tape, the right thing to do is let Boris Johnson take responsibility for it, but those of us who have the best interest of the country at heart should now be in favour of joining the European customs union, the single market, protect our trade, protect our jobs and then we can have a much happier new year.”

As well as Remainers calling to cancel Brexit, the SNP, Plaid Cymru and the Liberal Democrats all voted against the deal.

Despite Sir Keir whipping his party to vote in favour of a deal, 36 Labour MPs also chose to abstain from the vote.

The vote won, however, 521 to 73 and was passed into law the same day after being approved by the House of Lords.

Speaking on the vote, Mr Johnson claimed the deal will now allow the UK to reshape its future.

Sir Keir did state the deal was a “thin one” but voting against it would force a no deal Brexit.

Sir Keir said: “It’s often said there’s nothing simple about Brexit, but the choice before the house today is perfectly simple.

“Do we implement the treaty that has been agreed with the EU or do we not?

“That is the choice. If we choose not to, the outcome is clear.

“We leave the transition period without a deal, without a deal on security, on trade, on fisheries, without protection for our manufacturing sector, for farming, for countless British businesses and without a foothold to build a future relationship with the EU.

“Anyone choosing that option today knows there is no time to renegotiate.”

There had been criticism issued towards the Government over the little time given to review and vote on the deal.

However, backbench MPs from the European Research Group claimed the Prime Minister had performed a monumental task.