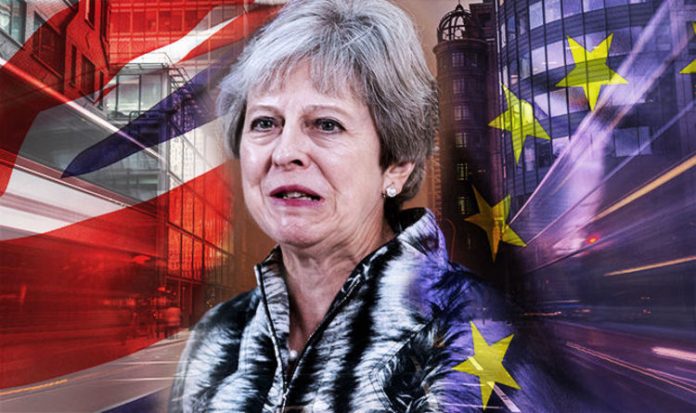 Stewart Jackson, the former chief of staff of David Davis who quit his role in the wake of the Prime Minister’s Chequers plan, told The Sun a u-turn on immigration from Europe when the UK leaves the bloc is set to be the “next big climbdown”.

Leaked cabinet papers revealed Britain will agree to let EU migrants stay in the country after Brexit on a permanent basis – even if a deal is not agreed with Brussels, enabling them to continue to access the NHS and claim benefits.

Mr Jackson labelled an offer to the European Union that will keep borders open to EU citizens as the “last major red line” yet to be sacrificed as the pressure increased to strike a post-Brexit deal with Brussels.

He said: “We can see the clues of further surrender in the fuzzy language from the Chequers agreement,” warning Tory colleagues that such a move would be “politically toxic and very poorly times” to the extent it could cost them the next general election.

Mr Jackson added: “One of the major drivers of the Leave campaign was: Who comes to our country and on what basis – decided by our own Parliament.”

Commenting on Theresa May, he continued: “It would also betray her own instincts, which she rightly gave voice to when she became Prime Minister.”

The former chief of staff for Mr Davis claimed that a stubborn stance on immigration had “struck a chord with millions of people angry and alienated at their voices being ignored by the political elite”.

He added that this had “delivered for her record poll ratings then and a real feeling of hope that at last people in power were listening”.

Mr Jackson added that to u-turn on that could prove disastrous for her government in the next election.

The warnings come as Foreign Secretary Jeremy Hunt will today warn EU chiefs against turning Brexit into a “messy divorce” that could leave Europe divided “for a generation”.

He will use a keynote speech at the US Institute for Peace in Washington to urge European Commission negotiators to end their delaying tactics and approach Mrs May’s offer of a Brexit deal “with an open mind”.

Mr Hunt will also warn that rejecting the UK’s offer of a new partnership based on friendship would be a “a geo-strategic error for Europe at an extremely vulnerable time in our history”.

The Foreign Secretary is expected to say: “One of the biggest threats to European unity would be a chaotic no-deal Brexit.

“Britain would, of course, find a way to prosper and we have faced many greater challenges in our history.

“But the risk of a messy divorce, as opposed to the friendship we seek, would be a fissure in relations between European allies that would take a generation to heal – a geo-strategic error for Europe at an extremely vulnerable time in our history.

“So, as I have been saying to European governments, now is the time for the European Commission to engage with an open mind with the fair and constructive proposals made by the Prime Minister.”

Mr Raab is also expected to deliver a major speech on the negotiations this week, with the Government set to begin releasing a series of more than 80 technical documents outlining preparations needed in case talks collapse without reaching a deal.

EU Commission spokesman Alexander Winterstein said Brussels officials were working at “full speed, 24/7” in the race to reach an agreement on a deal.

But France’s EU Commissioner Pierre Moscovici warned there would “not necessarily” be one between the UK and EU by March 2019.