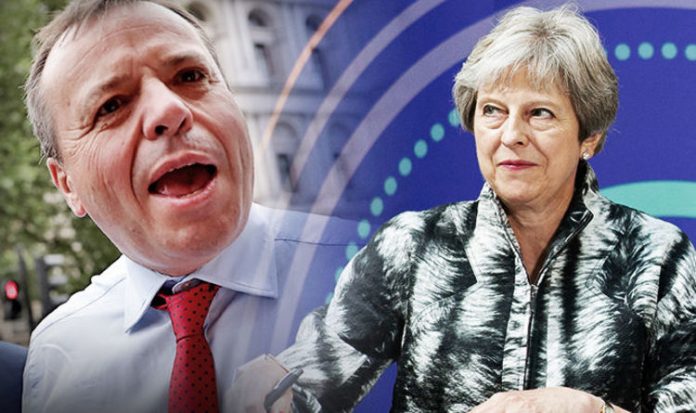 A “fundamental change” could bring a new pro-Brexit Prime Minister with grassroots support, according to the former Ukip donor.

The self-described “bad boy of Brexit” became infamous for his relationship with Nigel Farage, which saw him fund Ukip to take on the Tories and campaign for Brexit.

But Mr Banks expects Theresa May to be removed from power in the next six months and told supporters of his Leave.EU movement to “push for fundamental change within the party”.

Leave.EU’s campaign, ‘Operation Unite the Right’, says Britain is at a “crossroads” of either Brexit “in name only” or “sticking two fingers up” at Brussels and electing a Brexiteer leader.

Its website says: “We will be carrying out national polling over the next few weeks to launch a national campaign to persuade the Conservative grassroots they need a new Brexit leader that could decisively win again at the ballot box.

“It is likely that a Conservative Party leadership contest will be held in the next three to six months.

“Whoever wins it will automatically be our Prime Minister.

“After becoming a Conservative Party member, you will be eligible to vote in the final round of that contest.”

“You will therefore have a hand in choosing our next Prime Minister – and in determining the kind of Brexit that Britain gets.”

The impassioned blog added “it is not too late to save Brexit or the country”.

Mr Banks’ Leave.EU website does not specify who it wants members to support, but the relevant page has a picture of Boris Johnson, Margaret Thatcher and Jacob Rees-Mogg.

READ  Brexit CRISIS: Theresa May has DAYS to save Brexit and HERSELF as no confidence vote looms | Politics | News - UK

Mr Banks said on Twitter: “What the Conservative leadership fear most, at the moment, is a grassroots rebellion. 70 percent of Conservative members voted to leave and we aim to help them.

“There is a leadership contest on the way and that is where the battle for Brexit will be fought.”

He compared it to Labour’s 2015 rule changes which led to Jeremy Corbyn’s landslide victory and said it could damage the Conservatives in the long-run.

Grassroots Tories want the party’s ruling body to change current rules and allow any MP who has the support of 20 colleagues the ability to go through to the final ballad of party members.

Only two MPs can go through to election at the moment, which is a rule the former Tory leader implemented himself.

Lord Hague believes a rule change would benefit Boris Johnson, who is popular among grassroots supporters but unpopular in Parliament.

He said: “I am not arguing against boldness and radicalism, but against decisions easily swayed by the fashions of the moment, determined by unrepresentative minorities or unconnected from a much wider electorate.”