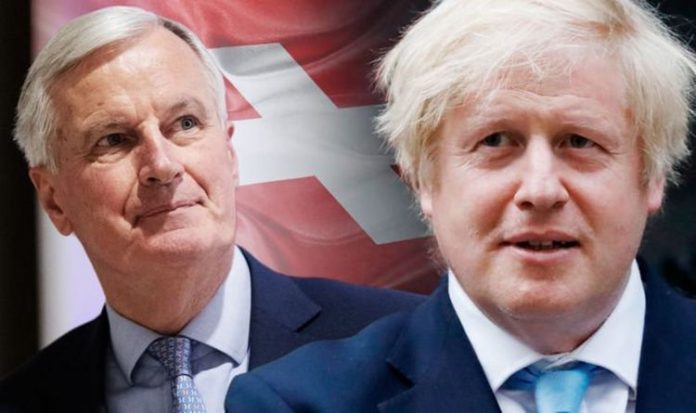 Switzerland gave the EU a boost yesterday when the country voted to keep freedom of movement. With all referendum votes counted, nearly 62 percent said they wanted to keep free movement, while 38 percent were against. The right wing Swiss People’s Party (SVP) pushed for freedom of movement to come to an end, but the policy was opposed by the government in Bern. Switzerland is not a member of the EU but has a series of interdependent treaties with Brussels which allow it access to Europe’s free trade area.

The result means the EU will not have to face a Brexit-like revolt from another important neighbour.

However, Switzerland and the EU are still enduring tensions over a stalled partnership treaty.

Switzerland spent much of 2019 working on an agreement with the EU, but the country’s economy minister criticised the bloc’s stance.

Guy Parmelin said he was pessimistic a deal could be reached as a result.

He said: “We want a good solution that can win majority support, and that is not the case at the moment.

“I don’t think we can wrap up this year. Our agenda and that of the EU allow a conclusion only next year at the earliest.”

He hit out at the bloc’s “dogmatic” approach to the negotiations.

Mr Parmelin warned the EU that the stalemate could force Switzerland to look for new partners such as the UK.

He continued: “I think the EU would weaken itself if it no longer cooperated with Switzerland on research.

“We are then forced to seek alternatives, perhaps along with Britain, if the EU remains dogmatic.”

He told the Financial Times in 2017 that the UK could “develop very positively” outside the EU, and argued Switzerland would also benefit from Brexit by gaining an ally outside the EU.

He added that on freedom of movement, in particular, the EU has come under pressure and would be forced to make concessions to member states.

Mr Maurer said: “The free movement of people is an issue that the EU has to solve.

“They have to give countries more freedom, I believe, otherwise it could break up over this.

“The pressure is growing and so the EU will have to make certain concessions in favour of the member states.

“The UK has lots of advantages and if they are used cleverly to decouple from the EU, as well as the new freedom in a good bilateral relationship, then the UK could develop very positively – I’m convinced of that.”