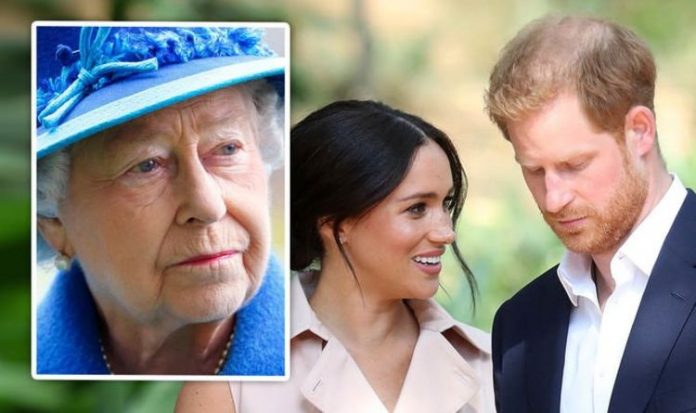 Meghan Markle and Prince Harry shouldn’t be stripped of their royal titles for stepping into the showbiz world and joining the political arena in the US as it would be a too harsh punishment, an insider said. The case of the Duke and Duchess of Sussex has been compared to Edward VIII’s amid growing calls to take away Meghan and Harry’s titles.

One source claimed courtiers have recently discussed whether the Sussexes could be stripped of their titles.

During these talks, some aides agreed the Royal Family should further distance themselves from the Sussexes.

The insider told day Times: “The view at the moment is that you can’t do that to Harry.

“Even Edward VIII kept his HRH when he abdicated … [but] there is a strong view that the family really does need to put more distance between them and Harry and Meghan.”

Edward VIII sparked a constitutional crisis in 1936 when he decided to abdicate after being asked to choose between his lover Wallis Simpson and the Crown.

By stepping down in December that year, Edward VIII paved the way to his brother George VI’s reign.

The Queen’s father made Edward VIII and Mrs Simpson Duke and Duchess of Windsor.

While the American socialite was never styled as Her Royal Highness, the former king was not stripped of his HRH style.

Calls for Meghan and Harry to lose their royal titles started to get louder and louder when the Duchess spoke about the importance of registering to vote in the upcoming US elections.

In August, Meghan took part in virtual summits organised by news organisation The 19th* and the When All Women Vote initiative to speak about the importance of making voters’ voice heard.

Despite not openly mentioning the candidates, during the latter, the Duchess was accused of attacking US President Donald Trump.

She said: “We’re only 75 days away from Election Day, and that is so very close and yet there’s so much work to be done in that amount of time because we all know what’s at stake this year.

“I know it. I think all of you certainly know it and if you’re here on this fun event with us, then you’re just as mobilised and energised to see the change that we all need and deserve.”

Meghan made a similar remark earlier this month, when she appeared in a video alongside with Prince Harry.

Meghan said: “Every four years we’re told: ‘This is the most important election of our lifetime.’ But this one is.”

In their latest joint video released last week, Harry, who can’t vote this November, also spoke about the US election for the first time urging US voters to steer away from negativity and hate online.

These remarks have been seen as politically charged by some royal watchers and commentators and in clear contrast with protocol calling for members of the Royal Family not to sway the public opinion when it comes to politics.

The majority of Britons also think the Duke and Duchess of Sussex should be stripped of their titles, according to a recent poll carried out for Tatler magazine.

Out of the 4,174 British adults surveyed by Savanta Comres, 68 percent said Meghan and Harry should have their titles taken away.

A total of 63 percent also believe that Meghan should not be commenting on US politics despite being a US citizen.

And 35 percent agreed the Duchess “wants to be president of the United States one day”.

Speculation regarding Meghan possibly eyeing the White House have been recently fuelled by a source.

A close friend of Meghan told Vanity Fair: “One of the reasons she was so keen not to give up her American citizenship was so she had the option to go into politics.

However, another source dismissed this claim, saying that while the Duchess is interested in politics she has no intention to walk down that path.

The source said: “While there’s no denying she is interested and engaged in politics as a topic, she harbours no ambition to enter a career in politics herself.”