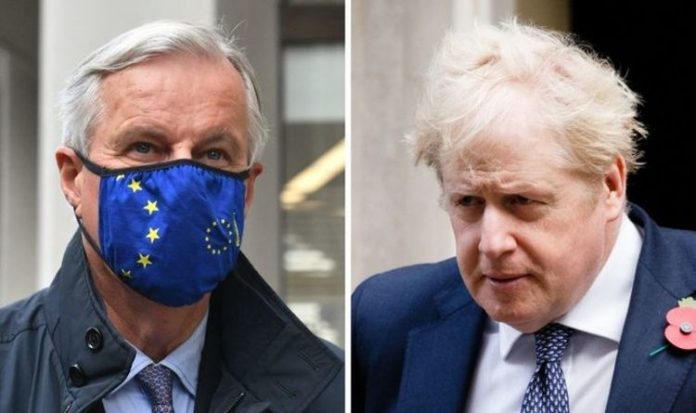 In a tweet today, the former Brexit Party for West Midlands claimed Mr Cummings – who led the official Vote Leave campaign in 2016 – may lead to the “dreaded Brexit in Name Only” (BRINO). Following Mr Cummings’ departure at the end of this year, it has been reported that some Remainers in No10 may begin to have a greater influence. Without Mr Cummings, it is thought some Remainers could push forward with a plan to introduce a 12-month extension to Brexit.

Indeed, with Mr Cummings leaving and his former ally in the Vote Leave campaign, Lee Cain announcing his resignation as director of communications, there is concern the UK will not have a clean break from the EU.

However, it is thought the Prime Minister would not allow any extension Brexit according to Sky News’ Sam Coates.

Coates tweeted: “Tonight suggestions Vote Leave crew in No10 arguing that there’s a push from ‘Remainers’ for a 12 month Brexit transition extension.

“Without Vote Leave crew to push back, their argument goes, there won’t be a clean brake on Dec 31.”

However, a Government source also told Coates: “I’ve never seen so much as a flicker that extension could be made.”

Any extension to Brexit was rubbished, however, by Politico journalist, Alex Wickham who quoted a government official claiming the idea as “B**s”.

The UK Government had until June 30 to apply for an extension to Brexit.

Any chance of an extension, however, was ruled out by the Prime Minister in his manifesto and as defined by the withdrawal agreement.

JUST IN: Brexit UK ‘may be lonely’ if Boris fails to ‘allay Biden’s concerns’

It is though Mr Cummings wants to finish Brexit and help the UK over the worst of the pandemic before departing his position.

However, the two sides have failed to reach an agreement ahead of the mid-November deadline.

Negotiations will now spill over into next week with Brussels stating November 19 as the final deadline for a deal to be agreed.

For Brussels, it is crucial a deal is imminently signed in order for the European Parliament to ratify the trade agreement.

The areas of divergence – fisheries, state aid and the dispute mechanism – still remain between the two sides.

Although the two sides have not raised the chances of an extension, there is the possibility they could agree a broad agreement by December 31.

By doing this, the two could agree on a general deal with a longer implementation period which could last for an elongated time.

This, however, would need to be ratified by all member states by the end of December.

If no agreement is reached, the UK will trade on WTO terms with EU from January 1.