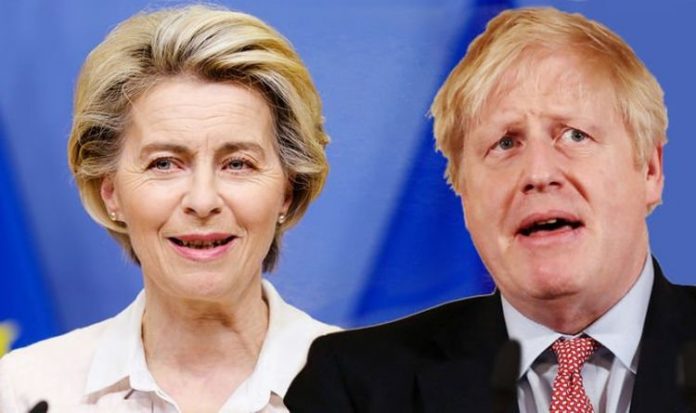 Prime Minister Boris Johnson will travel to Brussels for a face-to-face summit with European Commission President Ursula von der Leyen in an attempt to unlock a deal. After a phone call lasting an hour yesterday, the two leaders announced that their long-awaited crunch meeting will be held in the “coming days”, keeping hopes alive that an agreement could be struck before the end of the transition period. Sources on both sides pointed to Wednesday or Thursday as the most likely dates for the meeting.

However, both EU and UK insiders insist there is no certainty an agreement will be secured when the leaders meet.

A Downing Street source said: “Talks are in the same position now as they were on Friday.

“We have made no tangible progress. It’s clear this must now continue politically. While we do not consider this process to be closed, things are looking very tricky and there’s every chance we are not going to get there.”

One senior EU diplomat added: “We shall light a candle for them.”

As tensions rise and the clock ticks down, in an exclusive interview with Express.co.uk, Italian MEP Marco Campomenosi revealed why he thinks Brussels has had an advantage in these talks.

The prominent eurosceptic, who represents Matteo Salvini’s League party in the European Parliament, said: “The only advantage that the EU has is something that I would have expected to happen by now, but it didn’t.

“I thought the UK would have struck free trade agreements with the US, Australia and New Zealand.

“But from what I hear from several sources, these deals are still far away.

“This is an advantage for the EU.”

He added: “Trade deals like these would have been used by the UK to replace EU products with American ones, for example.

“The UK was therefore left without a weapon at its disposal to speed up the response from Brussels.”

According to Mr Campomenosi, though, a deal will still be agreed very soon.

He explained: “MEPs have been told to prepare for an extraordinary session of the European Parliament just before or immediately after Christmas.

“This means that despite all these latest warnings of a no deal scenario, the possibility is very real.

“In Europe, many member states have realised that they cannot afford otherwise.

“Italy, France and Germany have all got so much to lose if there is a no deal.”

Britain’s hopes of securing a trade deal with the US have been recently dashed by a warning from Joe Biden, the President-elect, that Washington will not sign a trade deal with anyone until the US has sorted out its competitiveness.

Britain had been closing in on a trade deal with Donald Trump’s administration but Mr Biden has said in a New York Times interview that his priorities will be to improve investment in US manufacturing and the protection of American workers.

An agreement with Australia appears to be still on the cards, though.

Earlier this month, former Australian Prime Minister Tony Abbott put pressure on the UK to wrap up a deal with his home nation before the end of the year.

Mr Abbott, who is now a top trade adviser to the Government, said he wanted both sides to “put all their cards on the table” before December 31 and close a deal before 2021.