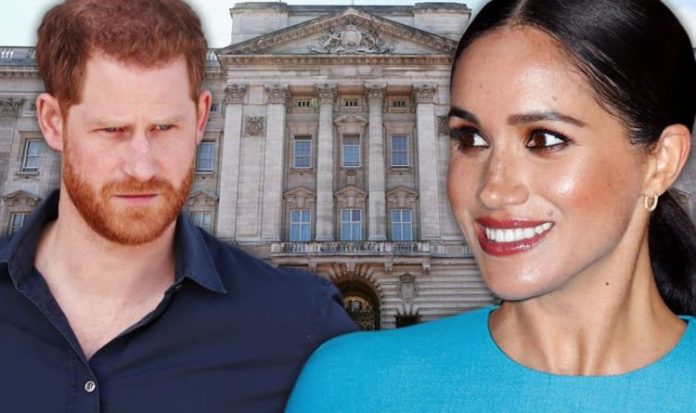 Meghan Markle, 39, and Prince Harry, 36, moved into a mansion in California this summer after stepping down as senior members of the Royal Family. The Duke and Duchess of Sussex bought a home in Montecito while also continuing to own Frogmore Cottage in Windsor. Royal biographer Angela Levin has claimed that the couple need to earn money for the upkeep of their home.

Speaking on talkRADIO, presenter Mike Graham said: “Any chance you’ve got of meeting Harry and Meghan now is if you buy a table for ten grand at some function they’re hosting which is rather unfortunate.”

Ms Levin added: “They have to earn a load of money to pay for their mortgage and getting the huge house cleaned and the garden done.

“It’s got 16 bathrooms, it needs quite a lot of scrubbing over time.”

“Where are they all being housed? They must have an office now.”

Ms Levin said: “I don’t know about that but I do know they have something to work on and that’s finding enough people to give them honours for all the things that they’ve wanted them to do.”

She went on to warn the royal couple against trying to “compete” with Queen Elizabeth II.

They are reportedly set to launch their own honours list to highlight the work being done to promote causes close to the couple’s heart.

“I’m astonished that Harry has given up one iota about his family and his wonderful grandmother.

“He was such a great man when I met him and spent over a year with him and now he looks terrified whenever he speaks as if he’s going to get a telling off from Meghan and to agree to something like that is nonsense.”

She added: “It’s just tragic and I don’t think anyone will take notice of them.

“It’s not going to mean that they will have more respect.”