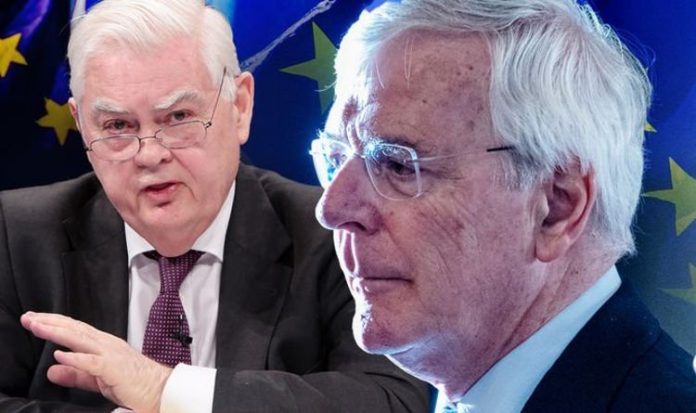 The former Conservative Prime Minister is a staunch critic of Brexit and the process behind it. Last year Mr Major said he believed the UK’s departure from the EU to be a “colossal mistake” for young people, insisting that Britain will likely rejoin the bloc in the future. Most controversially, he broke ranks with the Conservative Party and urged the UK to vote for MPs who didn’t support Brexit in the run-up to the 2019 general election.

It was a move that exposed entrenched division and, although Mr Major didn’t explicitly ask the electorate to vote against Boris Johnson, he said: “When the nation voted on Brexit, they did so out of fiction and undeliverable promises – as the facts become known, it’s extraordinary that a new vote is denied; extraordinary, and frankly, undemocratic.”

His most recent comments during a London speech have caused a greater furore, after he said Brexit may be “even more brutal than expected” due to the UK’s negotiating “failures”.

With sharp words, he slammed the Prime Minister, condemning what he said was the UK’s “inflexibility” and “threats” to the EU: things that would, he claimed, make future trade “less profitable” for Britain.

His comments referring to the economy made many reminisce about his own Government’s financial debacle in 1992, known as Black Wednesday, when interest rates sky-rocketed and the pound plummeted.

It was during this time that Mr Major and his team went to extreme lengths to cover up the Bank of England’s attempts to prop up the pound before it inevitably crashed.

Sterling fell from the Exchange Rate Mechanism (ERM) on September 16, 1992, when Mr Major failed to boost the currency’s value.

His Government had been committed to keeping the pound close to the value of Germany’s deutschmark, yet it soon became clear he had failed tremendously in this task.

On Black Wednesday, interest rates rose from 10 percent to 12 percent, only to soar another three points to 15 percent.

JUST IN: Barnier takes swipe at Boris for refusing to bow to EU Brexit demands

John Major: The former PM attempted to hide the true extent of the debacle on Black Wednesday (Image: GETTY)

This was all in an attempt to lure willing bidders to cash in on the pound and boost its value.

A reckless act, Mr Major failed in spectacular fashion and quickly bombed the Conservatives’ claim to being the party of economic reliability.

The overall cost of the operation tallied to an astonishing £3.3billion.

Big money names around the world like George Soros placed bets on the devaluation and were handsomely rewarded, in Mr Soros’ case, a healthy £1billion return.

Norman Lamont: The Lord was Major’s Chancellor and was reportedly ‘anxious’ about the debacle (Image: GETTY)

UK politics: A man reads about the news of Major’s blunder in a copy of the Daily Express, 1992 (Image: GETTY)

Mr Major’s Chancellor at the time, Norman Lamont – who has since been made a Lord – rejected calls for the truth on how much of the UK’s foreign currency reserves had been used to boost the pound’s value.

Papers published by the National Archives in 2018 showed that Lord Lamont was “increasingly anxious” about how news of the reserves, at this point extremely depleted, was being hidden from the public.

The Government went on to employ several tactics in a bid to claw its way out of the financial hole it had found itself in.

According to a 2018 report by the Financial Times, the document showed how Mr Major moved to improve the official reserve figures through short term borrowing, mainly from Germany’s Bundesbank, which had been made public, but whose size, £7.5billion, had not been disclosed; and borrowing around £7billion in foreign currency that had been publicly announced before Black Wednesday.

Brexit time: The UK and EU will trade on WTO terms should a deal fail to be reached (Image: Express Newspapers)

By November 1992, the country’s reserves were in the red by £11billion.

A 1997 Treasury analysis estimated that Black Wednesday cost Britain £3.3billion, based on the exchange rates at which currency reserves were sold and then rebuilt.

Many, then, have lashed out at Mr Major for his comments considering his own economic misgivings.

Former Tory MEP Daniel Hannan took to Twitter, and responded: “Perhaps Sir John is still miffed at the country for giving him the worst vote share of any Tory leader.”

Others have been more brutal in their assessment of Mr Major’s Brexit talk, as journalist Andrew Pierce said: “He’s never come to terms with Brexit and now calls Britain 2nd rate. Ironic, when most people think John Major was a 2nd rate PM.”

Mr Major appears to have wedged a further divide between Remainers and Brexiteers.

Those who voted to stay a part of the EU have championed him and his rhetoric on the isuse.

Meanwhile, controversial talk show host Julie Hartley-Brewer asked her followers who would be the first to “finally accept that he lost”, “Donald Trump? Or John Major?”

Others have commended the speech, like Alastair Campbell, the former Labour Party spin doctor whose leader, Tony Blair, defeated Mr Major in 1997, said: “Just read John Major speech. Superb and withering analysis of the mess we are in. A great country is doing such damage to itself.”