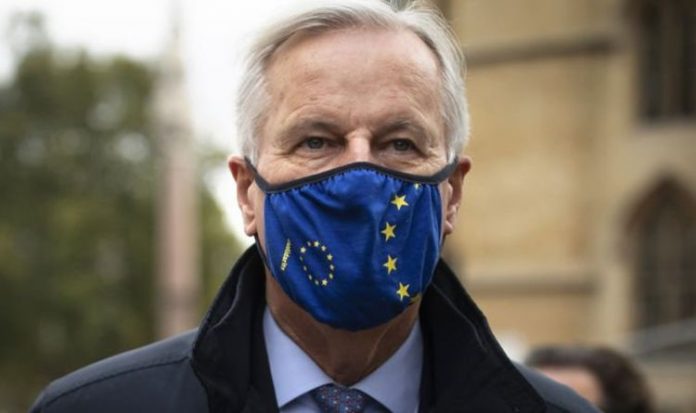 British negotiator Lord Frost and his Brussels counterpart Michel Barnier said there were still major differences remaining. But they will resume discussions in London on Sunday.

The two sides have just weeks to find a solution that can be signed off in time for the end of the transition period on December 31.

“Progress made, but I agree with Michel Barnier that wide divergences remain on some core issues. We will continue to work to find solutions that fully respect UK sovereignty.”

Negotiating teams will now remain in touch via video calls over the next few days.

Brussels officials believe a Joe Biden US presidency will give it the advantage in the last stages of the talks as the Democrat has said he will prioritise the EU.

Mr Barnier told European leaders that “considerable progress” had been made putting pen to paper on the legal text.

But he conceded they had failed to make a breakthrough on the key sticking points of access to British fishing waters, future common standards and policing the final agreement.

In a private meeting with EU ambassadors yesterday, the Brussels negotiator hinted agreements will not be found until closer to the mid-November deadline.

European Commission President Ursula von der Leyen could hold talks with Prime Minister Boris Johnson next week to deliver a final political push if a Brexit deal is in sight, a source said.

Both sides are hoping to strike an agreement by November 16 at the latest, but many fear talks can still collapse if the deadlock remains.