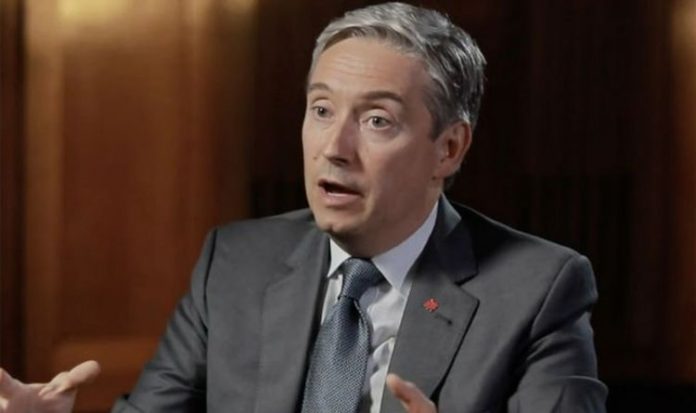 Canada’s Foreign Minister François-Philippe Champagne suggested Brussels will give into Boris Johnson’s Brexit demands “in the last few hours” of the talks. The incredible remarks from the top diplomat came during an interview with BBC Newsnight. Mr Champagne said the EU compromised at the last minute during its talks with Canada over its own free trade deal.

He told the BBC he would not be surprised to see the same thing happen over the next few weeks in the Brexit trade talks.

Mr Champagne spoke to the BBC before meeting with Foreign Secretary Dominic Raab on Friday, where they discussed boosting Canada-UK trade ties.

“What chance does the UK have to strike one in the next six to seven weeks for reaching an agreement on this future relationship?”

The Foreign Secretary responded: “Any trade negotiator would tell you that it’s the last two or three things that get a lot of time to negotiate.

“I am not in the talks but I would think a large part of the negotiation has been underway already.

“From what I understand the partners will continue to negotiate and the issues seem to be clearer and clearer every day.

“I think it is doable. I don’t think time is the main impediment.

Mr Champagne said: “When it comes to the relationship between the UK and Canada, the UK is our fifth biggest trading partner. You are talking about £40bn of trade a year.

“We are at the table negotiating an interim agreement with the UK, allowing us to have a bespoke agreement.

“In the mean time, I want to make sure there is complete stability for businesses and investments on both sides.

“We will then take the time it needs to get a deal between the UK and Canada.”

Earlier this week, Germany shelved plans to discuss Brexit at an EU ambassadors summit in September due to a lack of “tangible progress” in EU-UK trade talks.