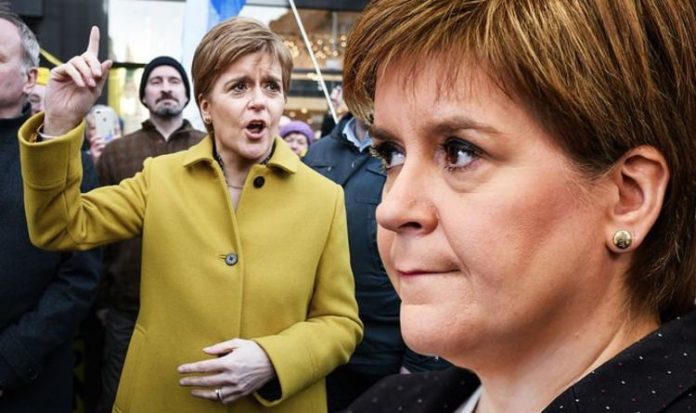 Tony Miklinski told Express.co.uk Nicola Sturgeon is aware of the economic uncertainty that will be created for Scotland as a result of independence but ignoring the big issues. He said Scotland’s First Minister should be focussing on cooperating with the Westminster Government post-pandemic to ensure the nation’s economic welfare.

Mr Miklinski said: “The fact that she knows, Nicola knows what the true cost of Scottish independence would be.

“Nicola knows that we are subsidised to the tune of £2,000 per head in this country by the UK Government because of the wealth created in the south.

“Nicola knows what the impact on our employment would be if we went independent.”

And he challenger her to answer three simple questions on Scottish independence.

“She knows all this and yet she is willing to drag us over the cliff of independence and probably walk away from it and say it is somebody else’s problem now.”

He continued: “The economic case for independence has never been made they tried basing it on the price of oil last time and that would have been catastrophic

“Post pandemic we need to get our economy moving, we need to get it thriving and the way to do that is by cooperating with Westminster, to have a cooperated Government here in Scotland, doing the best thing for employment and the general welfare of the Scottish people.

“That is not Nicola’s ambition, Nicola wants independent which is a very different thing.”

“She is not naturally of that ilk, she wants to be absolutely certain of winning.

“Therefore, the tensions in that party are very considerable.

“The fact that they have managed to keep it together for 14 years, you have got to admire it.

“The discipline they have had is at a cost, it means when things start to go wrong you can end up with a cataclysmic breakdown

“We have got to encourage that frankly for the good of the country, before they take us a place we do not want to go.”