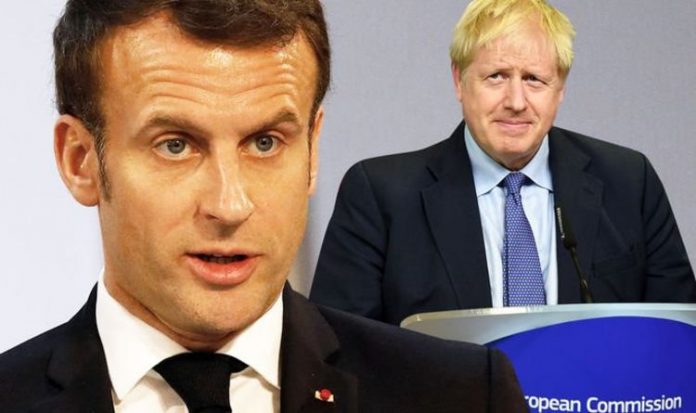 The EU put up a united stance against the UK during Brexit trade talks, with negotiator Michel Barnier backed up by other leaders in the bloc. This led to a long stalemate between Brussels and London and both sides sought to advance their interests. Fishing, trade and laws were all contentious issues, but eventually a deal was reached. As the UK officially left the bloc in January 2020, the EU was warned that its unity would be put to the test by Britain’s withdrawal.

As the Telegraph reported, Brussels diplomats even joked: “What are we going to do now the British have disappeared and left us alone with the French?”

In February 2020, experts assessed how the power dynamics in the bloc would change now that a major player had left.

Christian Odendahl of the Centre for Europe Reform said that “Germany’s role is shifting”.

He added that after Brexit “an important counterweight to France, and a close ally of the central and eastern EU countries, is now missing.”

Mr Odendahl continued: “Germany needs to play the moderator more than in the past, and will not be able to formulate bold visions for Europe any time soon.”

Andrew Duff, the president of the Spinelli Group which lobbies for a more federal Europe, said that the bloc hadn’t properly considered the negative impacts Brexit would have.

He said: “The EU has not yet, in my view, understood the full consequences of becoming smaller, poorer and therefore weaker.

READ MORE: Nexit: EU warned ‘Dutch feel they are being pushed towards exit’

Sweden is one country that has not adopted the euro, and some experts believe that this could also be a source of division in the EU.

Sebastian Plociennik, head of the EU programme at the Polish Institute of International Affairs, warned that these countries could be pushed towards eurozone membership.

DON’T MISS
Brexit: French figure told UK ‘get out of EU before you wreck it!’ [INSIGHT]
EU could ‘bleed to death’ as Netherlands risk bloc ‘disintegration’ [ANALYSIS]
Barnier’s fury at Brexit ‘spin’ as he fumed at Johnson [INSIGHT]

He said in 2016: “The UK’s exit from the EU will change the relationship between eurozone countries and those without the common currency, to the detriment of the latter.

“They will be faced with a choice between fast-track adoption of the euro or political and economic marginalisation.”

Tony Barber wrote for the World Economic Forum in 2016 that EU member states were concerned about the balance of power in the bloc without the UK.

He said: “The non-euro nations are worried that, without the UK, the EU balance of power will swing strongly in favour of eurozone governments.

“That could make it more difficult for the interests of those outside the single currency to gain a proper hearing.

“To the extent that France, Germany, Italy and others pursue initiatives aimed at closer economic, financial and fiscal integration of the eurozone, the impression could arise that the non-euro countries are stuck in a sort of EU second tier or outer circle.”