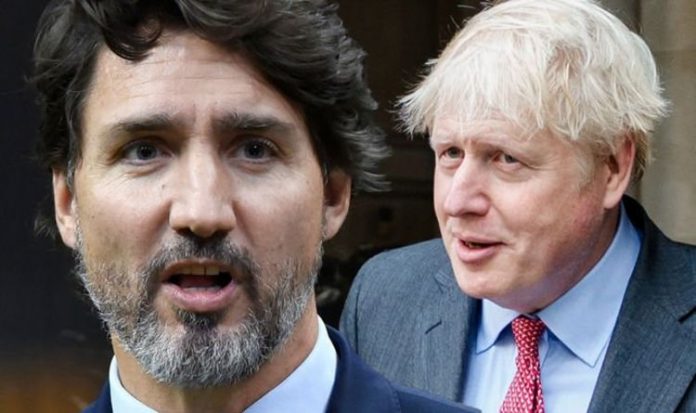 As they began a decisive week of talks in Brussels, the European Union and Britain both said a post-Brexit deal is still some way off. EU national leaders will assess the state of play at a summit next month, with a no deal scenario still on the cards. Negotiations have stumbled over fisheries, fair competition and settling disputes since earlier this year – but talks descended into fresh chaos at the beginning of September when London proposed draft laws that would undermine last year’s withdrawal agreement.

Deputy head of the bloc’s executive Commission, Maros Sefcovic, has said: “The UK’s positions are far apart from what the EU can accept.

“We maintain that the Bill, if adopted in its current form, would constitute an extremely serious violation of the withdrawal agreement and of international law.”

As the talks enter their final crucial stage, in a recent report, David Collins, a Professor of International Economic Law at City, University of London, claimed there is another Free Trade Agreement (FTA) Britain should focus on instead.

Mr Collins argued that the progress on the negotiation of a Canada-UK FTA is encouraging.

“Since the immediate aim appears to be to achieve continuity for businesses, this suggests that initial arrangements will constitute a rollover of the Comprehensive Economic and Trade Agreement (CETA) which Canada concluded with the EU four years ago.”

However, Mr Collins noted, there have been more recent indications from Canadian Prime Minister Justin Trudeau that an eventual Canada-UK agreement will go beyond CETA, offering greater coverage on a range of matters.

He explained: “Access for services suppliers will be a top priority for the UK in pursuing an FTA with Canada, since this is where the UK’s economic strength lies. The UK will accordingly want access to Canada’s financial sector, especially the insurance industry. Progress here will not be easy since Canada’s financial services market is tightly controlled, but the UK’s widely-respected regulatory standards in this area could help persuade Canada to open its doors.

JUST IN: Donald Trump tipped to win US election by Australian Senator

“Enhanced mutual recognition of professionals, including lawyers, would mark improvements from CETA which only grants very basic commitments. A shared legal heritage makes a strong case for further liberalisation on this front than was achieved by the EU.

“The Canada-UK FTA could also include greater commitments on digital trade than were contained in the CETA, reflecting both countries’ interest in liberalising this sector – in Canada’s case as part of a broader strategy of diversification (away from its reliance on the extractive sector) and in for the UK to ensure its continued role as a world leader in technology and the burgeoning digital services economy.”

With negotiations for the UK-Japan FTA now concluded, quick progress on an FTA with Canada, even on a CETA-rollover basis, could also facilitate the UK’s hoped accession to the Comprehensive and Progressive Agreement for Trans-Pacific Partnership (CPTPP).

If the UK were to join the partnership, this share of global GDP is expected to rise to about 16 percent.

Mr Collins added: “While this would require agreement of all 11 of that agreement’s signatories, support from Japan and Canada could pave the way for the UK’s joining the lucrative mega-regional within a year or two.

“With CPTPP membership in place, the UK would be precluded from onerous bilateral negotiations with other significant states including Mexico, Singapore and Vietnam.

He concluded: “It’s an understatement that UK trade negotiators have a lot on their plates at the moment, but they should not lose sight of the UK’s eighth largest non-EU trading partner and long-standing ally of the Anglosphere.

“The willingness to work on a Canada-UK FTA is clearly evident on both sides and continued preferential access is in everyone’s interest.

“Fresh from the success of its FTA with Japan, the UK is poised to secure an FTA with Canada which is at least as good as CETA, and hopefully better, by the end of the year.”