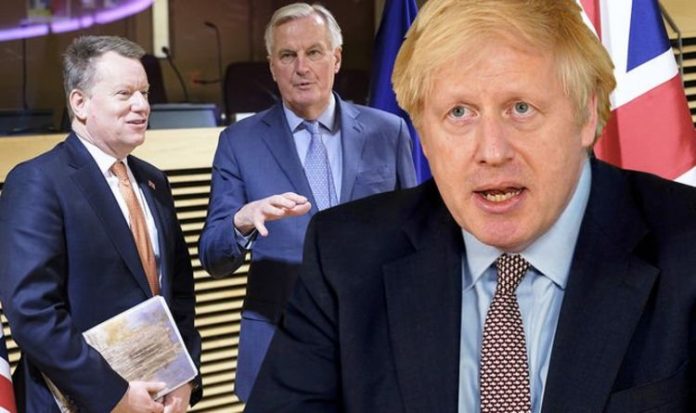 Prime Minister Boris Johnson threw a spanner in the works this week as he draws up legislation to override the withdrawal agreement. The move could lead to the collapse of negotiations between the UK and the EU as Mr Johnson plans to send Brussels an ultimatum. He will tell the bloc that an agreement must be reached by October 15 or the UK will walk away. Talks had already stalled with both Mr Barnier and UK negotiator David Frost expressing frustration.

The Brussels’ negotiator even warned that a deal would be “unlikely” if the stalemate continued.

The UK has warned the EU that it is also prepared to walk away from trade talks over Brussels’ state aid demands.

The two parties have clashed over fisheries, as the EU’s chief negotiator, Michel Barnier, insists that if the UK doesn’t open up its waters, access to European market will be denied.

However, analysis by James Crisp, the Telegraph’s Europe Correspondent, suggested that the EU’s position is unsustainable.

He said that Mr Barnier’s demands on a long term status quo fishing agreement, folded into the free trade agreement and without annual negotiations, would replicate what already existed in the Common Fisheries Policy.

However, most UK fishermen voted leave in 2016 as a result of frustration at quotas and increased competition in the UK’s lucrative waters.

Mr Crisp said in his June article: “Negotiators were due to discuss other factors such as historic pre-EU fishing rights and the economic impact on coastal communities that could be taken into account when calculating fishing opportunities.

“This would have been a small but significant step forward but EU fishing nations blocked the talks.

“Nevertheless Michel Barnier knows the current EU position can’t hold and that, deal or no deal, the UK will become an independent coastal state on January 1.”

While fisheries has been tipped by some to be the deal breaker, Mr Johnson’s efforts to rewrite the withdrawal agreement has become the new sticking point.

The move, first reported by the Financial Times, would row back parts of the UK’s agreement with the EU on state aid and customs arrangements for Northern Ireland.

It is understood that the UK government believes the original protocol is drafted ambiguously enough to allow for a change of interpretation – a view likely to be fiercely contested by Brussels.

Mr Barnier is in London today for the latest round of Brexit negotiations, and is sure to convey his anger at the Prime Minister’s strategy.

European Commission President Ursula von der Leyen cautioned that implementation in full of the agreement which Mr Johnson signed up to last year was a legal obligation and a condition for any future trade deal with the EU.

Business groups urged the Prime Minister to refocus his attention on avoiding an “unwelcome and dangerous” disorderly exit from the EU.

Logistics UK, the trade body for the freight sector, warned that his latest move “could jeopardise British business’s ability to keep Britain trading”.