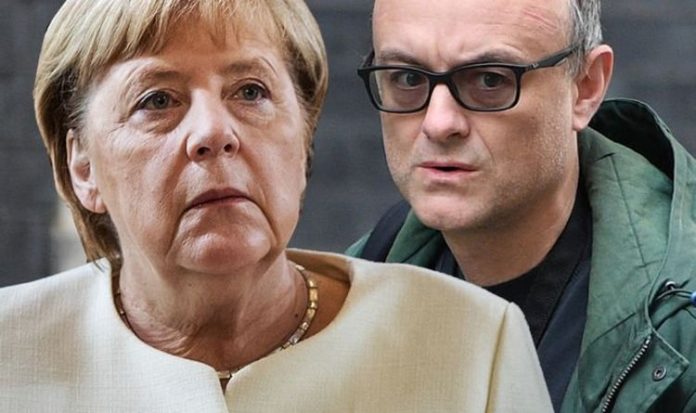 Mrs Merkel has told the European Union that it must be more realistic in accepting Britain’s negotiating position in fishing and trade talks ahead of today’s critical summit of leaders. The German Chancellor said Brussels had to accept that any deal must be in the interests of the UK and the EU. Her comments came as British sources blamed EU divisions and sabre-rattling from France for the missing of a deadline to find agreement this week.

Mrs Merkel, who holds the EU presidency, told a meeting of European mayors that a deal was “particularly urgent from the Irish perspective”.

She said: “We are going to continue to stand together in these withdrawal talks.

“But we also have to take into account the reality.

It is widely believed Mrs Merkel will play an influential role in brokering any UK-EU trade agreement in the coming weeks.

Other European leaders expect her to push French President Emmanuel Macron to compromise on his hardline demands to secure continued access to Britain’s coastal waters after the end of the year.

However, a throwback report by the Spectator reveals how Mr Johnson’s chief adviser Dominic Cummings warned him not to rely on Germany to solve Brexit.

Last year, Mr Cummings reportedly told a meeting of Government special advisers that former Prime Ministers David Cameron and Theresa May had both misunderstood Mrs Merkel and often relied on her to help them out when there was no realistic possibility that she would.

He said: “For ten years this building [No 10] under David Cameron, George Osborne and Theresa May has looked to Angela Merkel as the saviour.

READ  Direction issued to the Chief Regulator of Ofqual

The European Council summit today was Mr Johnson’s deadline for a deal to be “in sight” but that deadline has been missed.

European Union leaders are now expected to hold an emergency summit in mid-November to give their political blessing to the free trade agreement.

One senior EU diplomat said: “I don’t know if this can be done in two weeks.

“The end of the first week of November is probably the outermost deadline.”