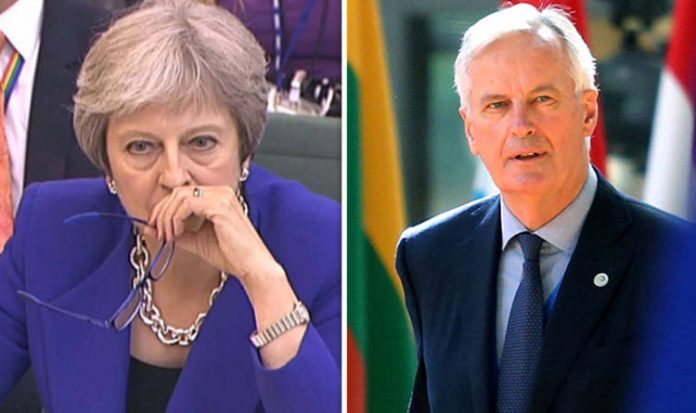 Discussions earlier this week between UK officials and Brussels bosses are understood to have been “difficult” as eurocrats accused Britain of “cherry picking” once again, despite Theresa May making a number of concessions.

EU member states have been told to remain silent and not trash the British offer before new Brexit Secretary Dominic Raab can meet the European Commission’s chief negotiator Mr Barnier for the first time as talks resume next week.

But a Brussels official described Mrs May’s plans as “unacceptable”, saying they are more interested in the Irish border issue than customs plans.

An EU diplomat representing a member state said: “What the UK has proposed is unacceptable. We have had no progress on the issue.

“It is good that the UK has tabled the white paper but that is not what we are talking about at the moment. The withdrawal agreement and Irish protocol in it comes first.”

Another source told the Guardian: “The white paper is not going to form the basis of the negotiations.”

Mr Raab has boosted preparations to play hardball with the EU as he has made planning for a ‘no deal’ scenario his sole focus in his first major step in redefining – and rebooting – his The Department for Exiting the European Union after David Davis threw in the towel.

Mrs May has also admitted Britain could still walk away without a Brexit deal if the European Union tries to bully Britain into making concessions.

On Friday Mr Barnier will address reporters at the end of a meeting of ministers from the 27 member states where he is expected to be presented with the European Commission’s plans for a no-deal scenario.

Britain’s white paper calls for a new “common rulebook, a free trade area for goods and a Facilitated Customs Arrangement” to enable frictionless UK-EU trade to continue and guarantee the prevention of a hard border on the island of Ireland.

The latest Brexit blueprint proposed to preserve the close trading ties Britain has with the EU through a free trade area administered by a common rulebook.

But Mrs May is facing pressure from both Leavers and Remainers over her Chequers agreement, which they describe as unworkable.

Brexiteers have rejected the plan, claiming it is a betrayal of the demands of Leave voters to withdraw from all current arrangements the UK is part of because of its EU membership.