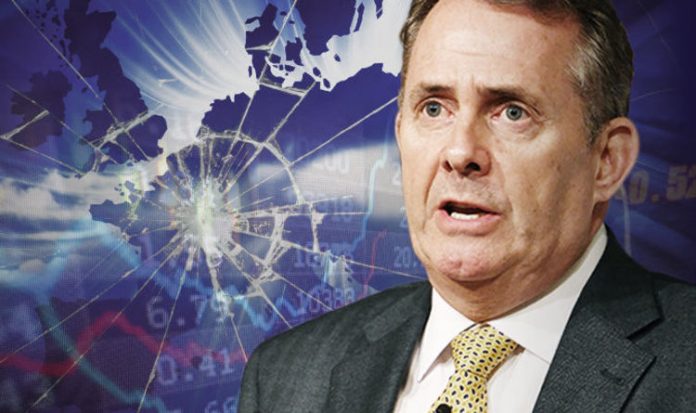 Dr Fox warned Brussels bosses they will suffer catastrophic economic consequences in the event of a no deal Brexit because the scenario would “reduce” EU member states’ GDP.

The Trade Secretary said EU members should understand what “no deal” might mean as a consequence to their economies, as he suggested it could be “very disproportionately shared”.

He warned it would trigger “reductions in GDP of something like 4 per cent for the Netherlands, 3.5 per cent for Belgium and 7 percent or 8 percent for Ireland”.

Newly-appointed Brexit Secretary Dominic Raab is stepping up plans to prepare for a no-deal Brexit following the release of Theresa May’s White Paper.

WHAT DOES A BREXIT NO DEAL MEAN?

But Dr Fox said he believed the fate of the paper was in the hands of Brussels bosses, saying: “The ball is now in their court”.

Britain’s white paper calls for a new “common rulebook, a free trade area for goods and a Facilitated Customs Arrangement” to enable frictionless UK-EU trade to continue and guarantee the prevention of a hard border on the island of Ireland.

Dr Fox insisted this would not prevent the UK from signing trade deals with countries across the world after Brexit as he revealed there would be talks about trade deals between Britain and the US, Australia and New Zealand.

He said: “For the first time in over 40 years we will be able to determine who we trade with, and on what terms.

“I want everyone to have their say, to make sure our future trade policy works for the whole of the UK.”

To boost Britain’s chance of a transatlantic trade deal with the US, Dr Fox said the UK was prepared to reduce tariffs on American cars after its exit from the EU.

Speaking after a speech in central London, he said: “When we leave the EU, if it is under that Chequers agreement, we have absolute freedom to change those manufacturing tariffs.”

The latest Brexit blueprint proposed to preserve the close trading ties Britain has with the EU through a free trade area administered by a common rulebook.

But Mrs May is facing pressure from both Leavers and Remainers over her Chequers agreement, which they describe as unworkable.

Brexiteers have rejected the plan, claiming it is a betrayal of the demands of Leave voters to withdraw from all current arrangements the UK is part of because of its EU membership.