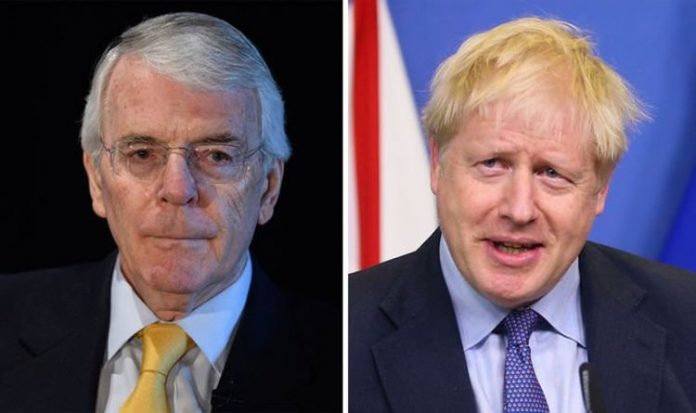 On January 1, the post-Brexit transition period expired, meaning EU rules no longer apply in Britain. It is a new chapter for the country’s history – as for the last 48 years, EU membership had constricted Britain’s ability to make its own decisions and set policies. The journey there was not an easy one, as Brexit day was preceded by a debilitating political period that bitterly divided the nation.

The time since the Leave vote in June 2016 involved unprecedented levels of parliamentary rancour, public anger and mistrust.

Many parliamentarians and politicians tried to ignore the democratic will of the people, including former Prime Ministers like Tony Blair and John Major.

Sir John’s battle to thwart Brexit can be seen as ironic, though, as according to Lord Charles Moore, he could have easily prevented it from happening.

Lord Moore, who worked as the former editor of the Daily Telegraph, argued that without Black Wednesday, there would have been no Brexit.

He wrote in a report for the Spectator last year: “BBC Radio 4’s The Reunion devoted 40 minutes to ‘Black Wednesday’, as our exit from the European Rate Mechanism (ERM) was mistakenly called.

“No one mentioned that the underlying aim behind the ERM was to help create the conditions for a European single currency, and that our falling out ensured that Britain would not join.

“Only in the 39th minute of the programme, did anyone — Kenneth Clarke — point out that ‘Europe’ was at the heart of the matter.

“If Black Wednesday had not exposed in one day’s trading the folly of the euro project for Britain, there would almost certainly have been no Brexit.

“No one came near to discussing this — a feat comparable to remembering Dunkirk without noting that it was followed by the Battle of Britain.”

In October 1990, as Chancellor of the Exchequer, John Major convinced then Prime Minister Margaret Thatcher into joining the ERM as a means of fighting inflation.

The ERM was a system introduced by the European Economic Community (EEC) on March 13, 1979, as part of the European Monetary System (EMS), to reduce exchange rate variability and achieve monetary stability in Europe, in preparation for economic and monetary union and the introduction of a single currency, the euro, which took place on January 1, 1999.

JUST IN: Mario Draghi’s push for ‘more European UK’ in City of London

Despite his staunch support of the ERM, his government became responsible for Britain’s exit from the system after the disastrous Black Wednesday on September 1992.

This event arguably led to a loss of confidence in Conservative economic policies and Sir John was never able to achieve a lead in opinion polls again.

As a consequence of the crash, the pound was devalued by 17 percent and interest rates increased twice in one day from 10 to 12 to 15 percent, and Black Wednesday dubbed as a “humiliation”.

He explained: “On September 16, 1992, we fell out of the European Exchange Rate Mechanism (ERM), despite all the efforts of the British Government to keep us in.

“The whole establishment, including the civil service, the CBI, the BBC, the Financial Times and all the usual suspects thought that this was a national disaster and humiliation. On the day of our enforced departure, it was as though they had gone into mourning.

“In fact, our enforced departure was a lucky escape from a system that had held the UK economy in a vice.

“Once we were out, the economy recovered strongly.

“September 16 was initially referred to as Black Wednesday. After a few months, though, as the economic recovery became obvious, its nickname was changed to White Wednesday and, after a bit longer, to Golden Wednesday.”