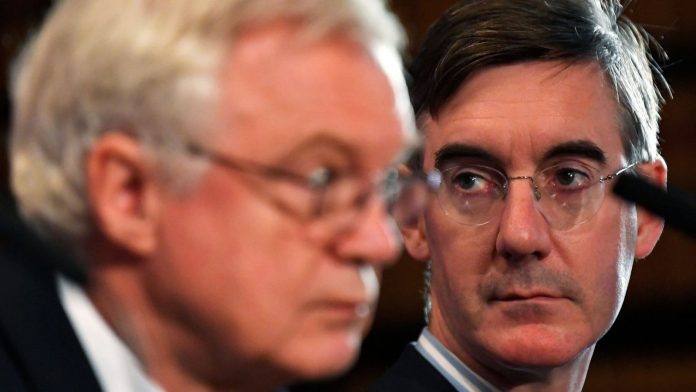 Top Brexiteers have publicly backed a “supercalifragilistic” trade deal with the EU as a rival plan to the prime minister’s proposals.

Under their alternative strategy, the UK would ditch the Chequers plan being pushed by Theresa May in favour of an “enhanced” free trade deal with the EU.

A new report, published by the Institute of Economic Affairs (IEA) on Monday, attacked the prime minister’s intent to sign up to a “common rulebook” with the EU after Brexit.

The 148-page document claims the Chequers plan would torpedo the government’s ambition to sign a post-Brexit free trade deal with the US by scuppering Britain’s hopes of a independent trade policy outside the EU.

It calls for the government to scrap its promise not to begin trade talks with non-EU countries until a Brexit deal is agreed, with the IEA’s analysis suggesting the start of negotiations with third countries would “put pressure” on Brussels.

Speaking at the IEA event in central London, Mr Davis claimed the prime minister is currently “in a cul-de-sac” over Brexit negotiations, after the EU rejected her Chequers plan at a summit in Salzburg, Austria, last week.

The Chequers plan would see the UK retain common European rules for goods, but not for services.

Revealing he agrees with “90-odd per cent” of the IEA plan, Mr Davis – who quit his Brexit role over Chequers – added he would still be a cabinet minister if the proposals were government policy.

He also disclosed one of his last instructions to his former civil servants was to “draft the legal text for a free trade plus arrangement”.

Mr Davis explained: “If you’ve got that to work from, the time-spinning, time-wasting activities of the European Commission – which we’ve seen lots of in the last two years – fail in the face of the need of the EU27 to have a deal and be able to recognise a deal that’s in their interest.”

Mr Rees-Mogg, who chairs the European Research Group of Conservative MPs, agreed there is still time for the PM to change tack and back the IEA proposal, as he noted the Greek bailout was agreed with the EU “over a weekend”.

He praised the plan for “looking at Britain’s position not just in the European context but globally”, as he attacked dialogue around Brexit as being too focused on “managing decline”.

Noting how EU officials have already offered the UK “the best trade deal they have done”, Mr Rees-Mogg backed a Brexit deal built upon the bloc’s trade agreement with Canada.

He said: “If you want to call it ‘Canada plus’ or ‘super Canada’ or ‘supercalifragilisticexpialidocious Canada’, that is what is being aimed at and being offered.”

Mr Rees-Mogg also claimed the IEA report “solves” the prime minister’s Brexit troubles, adding: “With her wisdom and insight, I think she will be thinking very carefully about adopting it.”

Despite its criticisms of the Chequers plan, the IEA report states the government should keep “all the agreed” elements of the UK’s withdrawal agreement with the EU, such as a deal on citizens’ rights, a transition period, and the UK’s £39bn divorce bill.

It adds the Irish border issue can be solved with “necessary investment and co-operation mechanisms to enable formalities on trade… to be overseen away from the border”.

Speaking at the launch, the report’s co-author Shanker Singham, IEA director of international trade and competition, said: “If we continue on the present course, Brexit will be a small damage limitation exercise which will weaken the UK, and be largely unnoticed by the rest of the world.

“However, if the UK were to adopt a bolder, more ambitious approach – one that sees us as a major player in global trade, one which takes our departure from the EU seriously but sees it as part of a much broader picture of taking a leading role on the world stage – then we can look forward to a brighter, more prosperous, free trading future for both the UK and the wider world.”

He also denied the IEA were suggesting “massive deregulation” for the UK after Brexit, but instead chasing “better regulation”.

Downing Street rejected a Brexit deal based on the EU’s agreement with Canada, with the prime minister’s spokesman saying it would fail to deliver solutions for Northern Ireland.

Liberal Democrat deputy leader Jo Swinson, who supports the People’s Vote campaign for a fresh EU referendum, said the IEA report had “laid bare” the “real agenda of the Brextremists”.

“They want to use Brexit as an excuse to slash and burn workers’ rights, environmental protections and food safety standards,” she said.

“They want to turn Britain into a bargain-basement economy so the Brexit elite can make a profit and strike grubby deals with the likes of Donald Trump.”