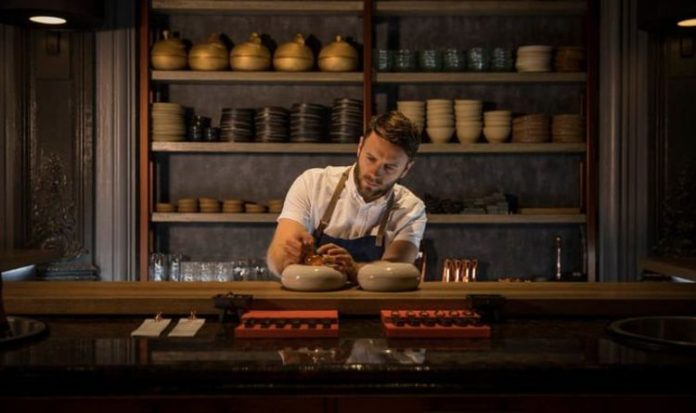 From juicy grass-fed beef to melt-in-the-mouth chocolates, we have everything you need to spoil your guests this Christmas. Plus, more celebrity chefs share their tips about the Brilliantly British producers in their regions. Kitchen table mum-preneur Kelly Barfoot founded Boxxfresh to feed her love for quality, feel-good fruit and veg. “Our shopping experience is reassuringly personalised, with customers choosing every single item that goes into their box,” she says. “This makes for easier meal planning and a reduction of unnecessary food and waste.”

Everything comes free of plastic and boxes can be ordered on a next-day delivery basis from Tuesday to Friday. Best of all, there are no ties or subscriptions to lock in customers, giving them the freedom and flexibility to order when they want ?

And the sumptuous dome-filled shells are still his biggest-seller today.

“We have a reputation for being creative with our flavour combinations,” says Paul. “Our Marmite truffle is the most famous example as a huge customer favourite for 14 years. It is sweet, salty and tangy, with a mouth-watering finish from the single origin Madagascan chocolate.”

Everything is hand-made and free from artificial flavourings, preservatives and stabilisers. Seasonally-sourced British ingredients are used where possible. Chocolates can be bought online or in person from two London shops in Islington and Soho.

Paul A Young launched his chocolate shop in 2006 (Image: Handout)

Debbie Pierce started selling black puddings aged 12 as a Saturday girl at the celebrated Bury Market. When local farmer James Wallace retired from the stall in 2002, Debbie realised she had a quality northern delicacy on her hands and an opportunity to sell it to the masses.

Working with food producers Jack and Richard Morris, she launched a website for The Bury Black Pudding and grew into the award-winning business it is today with a turnover of £6million, 95 staff and customers ranging from small independents to large supermarkets.

The recipe, which dates back more than 100 years, is said to be the healthiest black pudding on the market, with less than three per cent fat. The range includes chilli, gluten free and vegetarian versions.

Sticky and gooey, doughnuts are always a treat. But husband and wife Mario and Betina Evangelista specialise in a gourmet version, handbaked in Swindon before being delivered to selected farmers’ markets, cafes and restaurants across the south of England.

Betina says: “Pippin Doughnuts use the finest ingredients from locally sourced producers. Our small, dedicated team believes that truly exceptional doughnuts are made freshly by hand each day, from our rich leavened dough to the oozing fillings and shining glazes.”

There is much more to cheese-making than separating curds from whey, says Sandra Bell of Wensleydale Creamery, home to the world-famous crumbly Yorkshire cheese.

“It is almost a science as well as an art because no day is ever the same when you’re working with a living product,” she says.

“We add our own cheesemaking starter culture, which is affected by temperature and humidity, so it’s down to the skill of the cheesemakers to make the right decisions at the given time to achieve consistent quality and a great tasting product.

“Production runs like clockwork and the moment our head cheesemaker gives the nod, everyone knows they’ve got to take a certain activity.”

Making cheese is ‘a science as well as an art’ (Image: Handout)

The creamery is situated near the Yorkshire Dales National Park (Image: Handout)

Wensleydale Creamery, wedged between the rolling hills of Yorkshire Dales National Park in the town of Hawes, may conjure up thoughts of Wallace and Gromit but the cheesemaking story dates back to 1150 when French Cistercian monks arrived with their own recipes.

“They predominantly milked sheep and it was a way of preserving that milk, particularly for the winter months,” says Sandra. Their recipes were passed down through the centuries by farmers’ wives.

The first creamery, built in 1897, led to greater consistency, and despite a few changes of hands, remains in the same place. Today, the milk comes from 40 local small farms, which rely on natural fertilisers and techniques to get a high-quality product.

“You can’t plough the fields because of limestone rocks nearby so this encourages the unique fauna and flora that gives the grass – and milk – its specific flavour,” says Sandra. “Heritage and provenance are integral to our brand.”

When private equity supremo Nick Somper and his wife Jane were looking for a new venture they were determined to champion the quality and range of British food.

So in 2018, they formed The Dorset Meat Company to source grass-fed beef from native cattle reared in harmony with nature on small family farms in Dorset and Wiltshire. Breeds such as Red Ruby and Dexter cattle have surpassed their expectations.

The meat is dry-aged for four weeks before being prepared using traditional craft butchery methods. “With lockdown, the business has really taken off and customers appreciate the quality of the meat delivered to their homes,” says Nick, 60.

The company also sells farmhouse and artisan cheeses made by small independent cheesemakers in the West Country. The Goldminster vintage black truffle organic cheddar is particularly popular, as is Bath soft cheese.

CELEBRITY CHEFS SPILL THE BEANS? AND THE FISH, CHEESE AND HAM

TV chef Michael Caines is delighted to see his luxury country house hotel bouncing back from two lockdowns, and believes offering his guests top-rate ingredients from the southwest of England is a big reason why.

“It’s important for me to work with local producers to create a cuisine which is unique with a sense of place and a sense of taste,” says Michael, whose Lympstone Manor hotel, by the River Exe estuary near Exmouth, Devon, was awarded a Michelin star six months after opening.

Michael sources most of his meat from Darts Farm at Topsham, outside Exeter. It’s known for rearing superb Ruby Red Devon cattle, which graze on the farm’s conservational wetlands.

He’s a regular visitor to the world-renowned Brixham Fish Market further along the Devonshire coast.

Michael Caine’s restaurant is situated in a country house in Devon (Image: Handout)

“The produce across Devon and Cornwall is fantastic,” he adds. “The broad beans, the broccoli, raspberries, strawberries and elderberries, lettuce and herbs are all good.”

Michael has planted a vineyard at Lympstone Manor and hopes to be producing his own wine next year. He also plans to open a new restaurant soon on the sideshore at Exmouth to add to his award-winning family.

Growing up in Ballywalter, Co Down, chef Paul Rankin says he took the area’s great-tasting beef, fish, vegetables and potatoes for granted.

“It was beautiful, natural, wholesome food – all of it homecooked,” he adds. “We regularly had steak, potato farls, lamb chops and lemon sole, my mum’s favourite fish.”

He said: “I found world-class produce no one was shouting about. I worked with people who could help our underdeveloped areas including smoked salmon and small vegetable growers.

“I encouraged my suppliers to bring me the good stuff, saying, ‘If you grow it, I’ll buy it’.”

“We have Strangford Lough oysters, Armagh Bramley apples and Comber potatoes,” he says. “We have turbot, Dover sole, hake and haddock. We also have some of the best farmed salmon on the planet because Glenarm Organic Salmon farms in fast-flowing water so it feels and cuts like wild salmon.”

The creative use of British produce has made Adam Reid’s The French one of Manchester’s most top restaurants.

Adam Reid at The French restaurant at the Midland Hotel in Manchester (Image: Handout)

“It was built in the Midland Hotel in 1903 and focused on French cuisine but we now concentrate on using the abundance of British produce grown around here,” says chef-patron Adam, winner of the Great British Menu 2019.

“I like six-course set menus, which should not be confused with tasting menus as the dishes can be quite large,” he says.

“Our honey roast ham comes from Middle White pigs. They’re an old breed, which we get from a farmer in Shropshire. The meat is a bit more fatty and full of flavour.”

The beef is from cows reared on the lush grasses of the Lake District. “Our shellfish comes from Scotland and our fish is transported from Cornwall,” says Adam. But when it comes to cheeses, “of course I look to Lancashire” he laughs. “I like Kirkham’s.”

The popular winter dish is Tater’ash.

“It consists of minced beef, onions, potatoes and other special ingredients, including a wonderful gravy.”

Do you have a favourite shop, restaurant or business? If it excels, we want to hear about it. Go to www.express.co.uk/nominate and tell us why it deserves to be recognised as Brilliantly British.