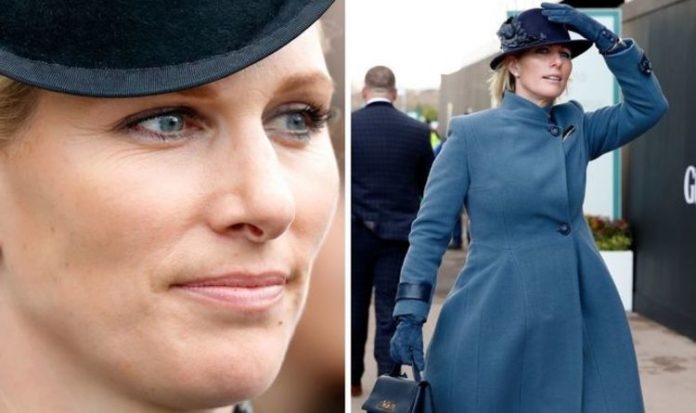 Zara’s husband, the former England international rugby player Mike Tindall, made the announcement during the latest episode of his podcast, The Good, The Bad & The Rugby. He said: “It’s been a good week for me, I had a little scan last week – third Tindall on its way.” The couple already have two children, Mia and Lena, born in 2014 and 2018 respectively.

Zara, the Queen’s granddaughter, married Mike in 2011, with the pair having first met in a bar in Sydney in 2003.

The royal has previously talked about how “normal” her life has been without an official title, something which has allowed her to focus on her children and job in equestrian.

Zara and her brother Peter were brought up in the hard-working family of Princess Anne and Mark Phillips.

Anne has often been described as one of the busiest members of the Firm; a patron to over 200 organisations.

Zara Tindall: The royal is pregnant with her third child (Image: GETTY)

Zara opened up about how “brutal” life had been growing up in this environment, yet explained it was one that had helped her to become the mother, professional and person she is today.

The revelation came during the BBC’s documentary to commemorate Anne’s 60th birthday, ‘Inside Sport: The Princess Royal at 60’.

Reflecting on the “get on with it” ethos she had been raised under, Zara said: “It’s amazing how much she (Anne) can fit into a week.

“The amount of different places she goes to in the country and people she meets and, she always remembers everyone she’s met.

“It’s just unbelievable, her capacity to do all of it.”

It was here that Peter chipped in to offer insight into their tough but rewarding childhood.

He said in 2010: “We’ve been very much brought up on whatever we do in life we were going to have to work bloody hard.

“Whether it’s Zara doing equestrian, three-day eventing, or me in what I’m doing.

Mike Tindall has thrived as a royal because he is an ‘alpha sportsman’ [REPORT]
Princess Anne stopped from enjoying custom with grandchildren [INSIGHT]
Where does Zara Tindall live? A look at Zara’s home with Mike [ANALYSIS]

Princess Anne: The royal has been described as one of the most hard-working members of The Firm (Image: GETTY)

“At the end of the day we were told we had to work bloody hard – to just get on and do it, don’t complain or quibble about the work.”

Meanwhile, royal fans and watchers will be delighted with the royal baby announcement.

It is not yet clear whether the baby is a boy or a girl.

There are strict protocols surrounding a pregnancy within the Royal Family.

Her Majesty the Queen is the first to find out about a birth, even before the newborn’s grandparents.

Pregnant royals, according to Cosmopolitan, must wear closed-toed shoes, with heels, depending on the event, usually the requirement.

Royals are also expected not to have baby showers – something largely practiced in the US but in recent years found across the UK.

Equestrian: Zara follows in a long line of horse-loving royals including the Queen (Image: GETTY)

There are instances, however, of members going against this rule.

Last year, Meghan Markle and her friends gathered for an extravagant baby shower in New York when she was pregnant with baby Archie.