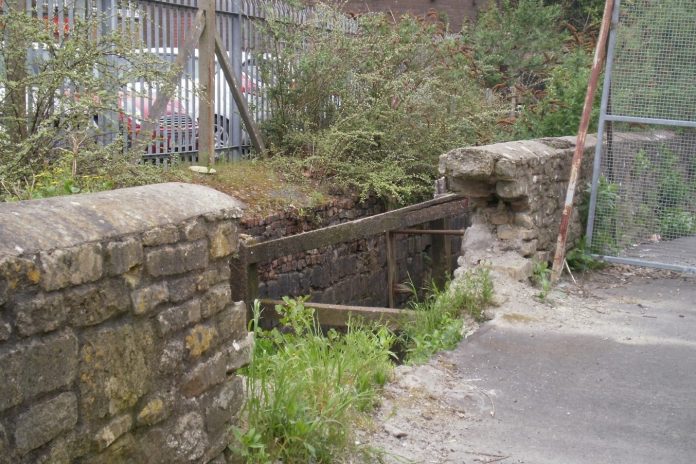 The Environment Agency was concerned that masonry and other debris from the disintegrating wall could be washed downstream and disrupt a tidal flap, increasing flood risk to a large number of properties.

The Agency had earlier inspected the southern boundary wall at the Windmill Farm Business Park, Bartley Street, and found it to be in a poor condition. Some sections had collapsed into the Malago Brook, a tributary of the Lower River Avon. What remained of the wall, was also at risk of failure. The watercourse is a main river.

In 2009 the landowner, Maysouth Ltd applied to the Environment Agency for permission to carry out repairs. Its application was refused on the grounds the company had failed to provide sufficient information.

However, permission was granted for certain temporary works including the installation of scaffolding wall props in the river channel.

In 2011 the Agency decided it was necessary to install a trash screen where the Malago Brook enters a culvert. This would prevent debris being carried downstream to the confluence of the Malago and Lower River Avon where it could block or force open a tidal flap.

However, it was not possible for the screen to be installed because of the poor condition of the retaining wall. The Agency decided to delay any in-river works until the repairs had been completed.

Following a site meeting in December 2011, Maysouth Ltd said it no longer believed the wall was its responsibility and would not be carrying out any repairs.

The company claimed maintenance of the wall and any repairs lay with Bristol City Council. This view was challenged by the council that said it did not own the wall or the land it stood on. Therefore, responsibility fell to Maysouth Ltd as riparian owner.

In September 2014, the Agency served the company with a legal notice requiring it to repair the wall. Following further site visits and unsuccessful discussions, the Agency served a second notice in May 2016 with a 6 month deadline. When officers returned in December 2016 the wall still hadn’t been repaired and 3 sections had fallen away. Temporary scaffolding supports were still in place and there was debris in the river channel.

Maysouth Ltd were subsequently prosecuted to ensure future compliance. Two years later in May 2018, the company finally accepted it was responsible for the wall and half the riverbed and that it had not complied with the notice.

Trudy Dove of the The Environment Agency said:

We have a responsibility to manage flood risks on main rivers. We were concerned that masonry from this damaged wall could block or jam open a tidal flap  and increase the flood risk to a large number of commercial and residential properties.

Maysouth Ltd had ample opportunity to repair the wall, but chose not to meet their legal responsibilities, leaving us with no choice other than to prosecute.

Despite the earlier conviction, Maysouth Ltd, failed to carry out the repairs so were brought back to court in 2020. Appearing before Bristol magistrates, the company contested that a further daily penalty should be imposed for non-compliance. The court disagreed and at a hearing on 28 January, 2021, Maysouth Ltd, of Rainbow Phoenix Way, Swansea Enterprise Park, Swansea, Wales, were fined £26,760 and ordered to pay £10,585 costs for continuing to fail to comply with a notice served in May 2016.

District Judge Patricia Evans said the defendant had a responsibility to complete the repairs in a ‘timely fashion’. It simply had not done that and while it was accepted negotiations over the required permit would take time, she found the company had been ‘dragging its feet’ despite extensive efforts by the Environment Agency to resolve the issue over a number of years.