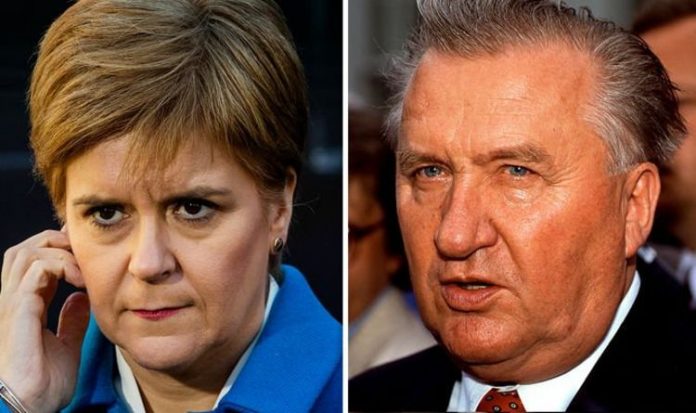 At the end of January, the Scottish National Party (SNP) announced plans to try to legislate for a second independence referendum even if Prime Minister Boris Johnson continues to refuse to approve such a vote. Michael Russell, Scotland’s Constitution Secretary and SNP President, said a bill to hold Indyref2 will be introduced to the Scottish Parliament if the Holyrood elections result in a pro-independence majority. The plans followed growing pressure on SNP leaders from advocates of a “Plan B” route to a referendum.

He said he will not approve another independence vote and argued in an interview in January that Westminster should not allow one until the 2050s.

Mr Russell said in a statement that the Scottish Parliament could then pass a bill preparing for an independence vote even without UK approval, challenging Westminster to “take legal action to dispute the legal basis of the referendum and seek to block the will of the Scottish people in the courts”.

As it is clear the Union is about to enter a constitutional crisis, unearthed reports suggest that Scottish First Minister Nicola Sturgeon should think twice about leaving the UK, as independence could bring the end of social democracy in Scotland – as it did with socialism in Slovakia.

The experience of the “Velvet Divorce” between Slovakia and the Czech Republic is often cited by Scottish independence advocates as a possible model for their own breakup with Britain.

Like many Scottish nationalists, advocates of Slovak independence wanted to break away from their larger, richer, partner, in part so they could pursue more interventionist economic policies.

However, with the loss of Czech subsidies, independent Slovakia ended up having to pursue much more free market-oriented policies than before, bringing an end to socialism in the country.

Sturgeon on brink as ‘independence will kill socialism in Scotland’ as it did in Slovakia (Image: GETTY)

In a 2017 report, Marian L. Tupy, a senior policy analyst at the Cato Institute’s Centre for Global Liberty and Prosperity, explained: “Like the Scots, the Slovaks resented their much larger neighbour and clamoured for more autonomy.

“Like the English, the Czechs were not always sensitive to Slovak complaints and paid scant attention to the impact of policies dreamed up in the Czech (as well as Czechoslovak) capital of Prague on Slovakia. The controversial decision of the Prague government to shut down arms manufacturing in Slovakia following the Velvet Revolution in 1989 was a case in point.

“That said, Slovakia in the early Nineties was in no position to demand greater independence (confederation) from the Czechs.

“Slovaks received a large annual subsidy from the Czechs and would have been hard pressed to balance their books as an independent nation.

“Moreover, most of the Czechoslovak civil service was made up of Czechs or Slovaks who would, it later turned out, continue to live in the Czech metropolis rather than move to the much more provincial Slovak capital, Bratislava.”

But what the Slovaks did not count on was the iron will of former Czech President Vaclav Klaus.

Mr Klaus, who served as Czechoslovak Finance Minister before ascending to the Czech premiership, was determined to go ahead with far-reaching free-market reforms, which he knew the Czech lands needed in order to break-out of the communist rut.

JUST IN: Sturgeon’s currency plan in tatters as ‘Scotland to join euro in EU’

He took a dim view of the financial transfers to Slovakia and of the socialist Slovak government.

Slovak demands for greater autonomy backfired and Czechoslovakia ceased to exist on January 1, 1993.

He added: “Over the next five years, the Czechs powered ahead with their reforms and soon saw impressive GDP growth rates and massive inflows of foreign direct investment. The Czech post-communist recession was very shallow and unemployment, which grew as unproductive factories were forced to shut down, soon gave way to healthy job and income growth.

“The early years of Slovak independence were close to catastrophic. The heavily-regulated economy was artificially stimulated through heavy borrowing.

“Even so, the Treasury ran large deficits and by 1998, the country was within a hair’s breadth of bankruptcy. Moreover, under assault for mismanagement and corruption, the government grew increasingly authoritarian, which resulted in Slovakia’s international isolation.

“Then, in 1998, Slovaks kicked out the nationalists and elected a reformist government, which proceeded to liberalise the economy, privatise loss-making state-owned enterprises and massively improve the country’s business environment. In 2004, Slovakia entered both NATO and the European Union.”

The parallels with Scotland, Mr Tupy wrote, should be obvious, as while the Scots resent their much bigger neighbour in the south, they are also heavily reliant on English subsidies, which are bound to grow larger as Scottish oil becomes scarcer and falls in price due to the fracking revolution in the US.

Michal Kováč was the first President of Slovakia (Image: GETTY)

He concluded in his piece for CapX: “It is that subsidy that allows Holyrood to maintain a much more socialist economic model than would be the case if Scotland had to fend for itself.

“The English are putting up with Scottish dependence and periodic hissy fits because of a deep emotional commitment to the Union by a succession of British leaders.

“That is an emotion I fully share, yet I also believe that independence is exactly what Scotland needs in order to rid the birthplace of Adam Smith of socialism once and for all – after a brutal but necessary learning experience, like Slovakia’s.”

According to a different report by the CATO Institute, Scotland’s greater statism and suspicion of capitalism are potent obstacles to reform in England and Wales and a serious danger to economic prosperity north of the border.

The 2014 report reads: “Sooner or later, Scotland will need to introduce reforms that it would never accept from a Westminster government.

“The end of the Union may be a high price to pay for the end of socialism on the British Isles, but the rewards from a more robust, long-term economic growth are not negligible either.”

During the first Scottish independence referendum campaign, the same sentiment was echoed by Wealthy Nation – a collection of business people, academics and others, who described Britain as a failed state and pushed for Scotland to adopt more of a Thatcher-esque free market approach, with less government interference, less tax and more choice in health and education.

The group argued that, rather than being held back by the brand of socialism offered by the SNP, Scotland should have looked to the example of former Communist bloc countries like Slovakia and Slovenia, whose “approach to de-regulation, de-taxation and de-centralisation led to economic growth not seen in Scotland for 100 years”.

In an exclusive interview with Express.co.uk, constitutional historian Vernon Bogdanor argued the reforms Ms Sturgeon might have to implement to join the EU will make former Chancellor of the Exchequer George Osborne look like Santa Clause.

Mr Osborne was the architect of the controversial austerity drive in Britain after the financial crisis.

“Scotland joining the euro would cause lots of problems because their current budget deficit is around 7 percent. And they would have to reduce it to 3 percent, under current EU rules.

In another interview with Express.co.uk, Economics Professor at Edinburgh Napier University Piotr Jaworski warned many people in Scotland will end up regretting voting for independence.