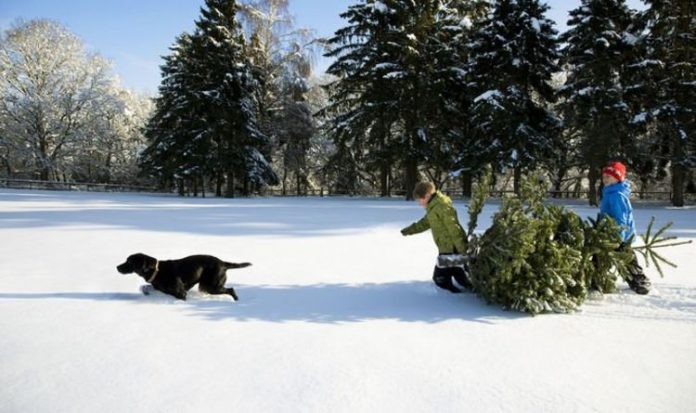 Forecasters said northern England, Wales and Scotland were in line for a sprinkling as temperatures plummet over the holiday. Bookmakers cut their odds on Manchester, Cardiff, Newcastle and Edinburgh seeing their first Christmas snow in five years. Heavy falls have already caused chaos in Cumbria after a lorry jackknifed in freezing conditions and blocked a major road yesterday.

But the snowfall is expected to be welcomed after many regions were pelted with driving rain on Tuesday and yesterday. Flood alerts and warnings were still in place last night and roads in some Welsh towns were submerged.

Dan Suri, chief meteorologist at the Met Office, said snow could begin to fall today in Yorkshire and parts of the North East.

He added: “Cloud on Christmas Day will increase from the North

West and could be thick enough for a short-lived snow flurry in parts of the North.”

John Hill, spokesman for Coral, said: “There’s a strong prospect of a white Christmas. Our betting suggests it is Edinburgh and Newcastle which are the most likely major UK cities to see snow on the big day.

“London is unlikely to have a white Christmas but it has been an unpredictable year and there may just one more surprise left in 2020.”

On the A686 near Alston, Cumbria, a HGV blocked the road after skidding on snow yesterday.

A police spokesman urged: “Motorists are asked to drive to the road conditions in front, which may be slower than the speed limit.”

Parts of Scotland could see up to eight inches of snow on Christmas Day as temperatures plunged to below -5C.

Meanwhile, heavy rain was linked to the death of a driver on a saturated road near Exeter, Devon.

Police said the man in his 20s was at the wheel of a blue Audi which collided with a lorry on the A3052 shortly after midnight.

Devon County Council warned of “lots of rain across the county, specifically over the high ground”.

Howling gales ripped a tree from the ground and left it blocking the A30 between Penzance, Cornwall and Land’s End. In Wales, wet weather warnings covered most of the country with the south worst affected and four train routes from Cardiff were suspended.