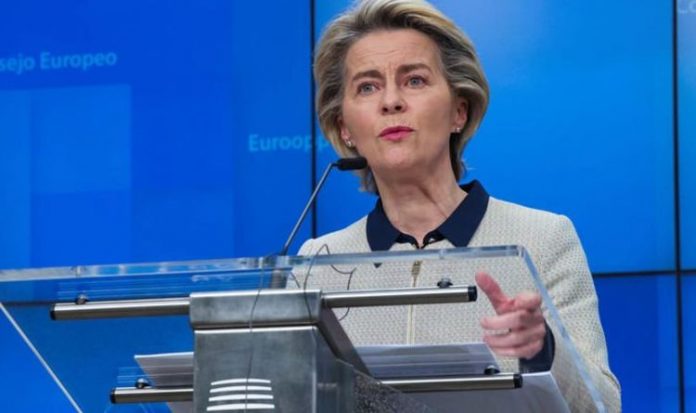 Brussels sources said 95 per cent of the agreement on future relations is done but some compromise is needed. However No 10 insisted its negotiating position is clear and it will not swap sovereignty for new trading terms. “We remain clear that we want an agreement that recognises the UK as a sovereign nation,” a spokesman said. “That remains the case.” Talks are continuing online as an EU official tested positive for Covid. It is hoped that face-to-face negotiations will resume at the end of next week as both sides battle for a breakthrough.

UK and EU negotiators signalled that progress has been made in recent days. European Commission president Ursula von der Leyen suggested talks are near the “finish line” and the two sides are getting down to work on the substance of the future relationship.

She added: “After difficult weeks with very, very slow progress now we have seen in the last days better progress, more movement on important files. This is good. Progress for example has been made on the question of state aid, but there are still quite some metres to the finish line.” Key sticking points include state aid, fishing quotas and governance.

An EU diplomat said: “It seems that we are very close to agreement on most issues but differences on the three contentious issues persist.”

Another official said: “Some things on the level playing field have moved, albeit very very slowly. Fisheries are not really moving anywhere.”

No 10 said the team headed by chief negotiator Lord Frost had worked constructively to move talks forward despite the bloc refusing to drop its most controversial demands. A UK spokesman said: “We have listened carefully to our EU counterparts, signalled flexibility where possible to move the talks forward and tabled new proposals to make progress.

“Although there has been some progress in recent days, there is much work to be done and time is now very short. We now need to see more realism from the EU on what it means for the UK to be an independent state.”

EU officials are working on emergency plans to fully approve any Brexit trade deal amid concerns that the talks will run into December.

At a private Brussels meeting, some EU states expressed concern there will not be enough time to scrutinise the 600-page document being drawn up.

It is possible legally for a deal to be implemented without approval from the European Parliament but it would be politically explosive. Instead, a special December 28 meeting of MEPs looks more likely.