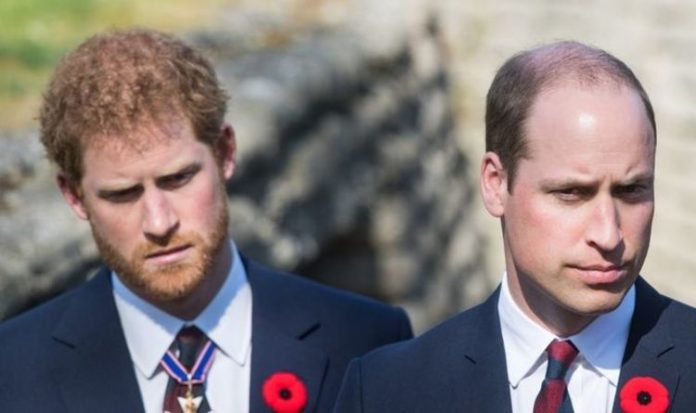 Prince Harry and Prince William’s reported fallout has been discussed over the past several months by experts who have outlined the consequences it may have on the brothers’ relationship and their families. But one commentator has pointed out this alleged split between the brothers is also dangerous for the Royal Family itself.

Robert Lacey told Express.co.uk he has seen first-hand how the public has become polarised around the two brothers, with royal fans divided into factions of pro-Cambridges and pro-Sussexes.

Speaking about royalists reacting to his book Battle of Brothers, the author said he has received messages of complaint from both fans of the Cambridges and the Sussexes about his reports on the two young families.

The division within the public created by the alleged split is “dangerous for the Royal Family” and doesn’t represent what the Crown is it’s “supposed to do”, especially at a time of crisis, Mr Lacey said.

He explained: “The Royal Family at the moment is polarising people.

“But it’s not the job of the Royal Family to polarise people.

“Its job is to bring people together.

“At the beginning of the COVID crisis, the Queen made that brilliant, brilliant speech that for a moment created national unity and did the royal job perfectly.

“That’s the British system – some people may laugh at the monarchy, but when she gave that speech she illustrated precisely why we have a monarchy.

“We have this ancient institution that has become the example and mouthpiece of the values we are all supposed to agree upon.

“The Queen embodied that beautifully in her ‘We’ll Meet Again’ speech.

“Sadly, she can’t do that for the second spike – so what are we left with?”

Mr Lacey said it is vital for Prince Harry and Prince William to show they have come to an agreement and understanding.

The Queen delivered a poignant speech in April (Image: GETTY)

The royal commentator pointed out the brothers are to meet in public on July 1 next year, when they will unveil a statue dedicated to Princess Diana at Kensington Palace.

Speaking about their future face-to-face meeting in Britain, Mr Lacey said: “The main players in this dispute will be standing there in the eyes of the public and the world.

“And the world will want to know: are these brothers now reconciled or are we looking at some sort of act, some sort of pretence for the public, something they feel they ought to do?”

As detailed in his latest book, Mr Lacey believes the rift between Prince Harry and Prince William was born out of genuine differences.

He said: “Now, I’m not saying that Harry and William have to reconcile by July 1.

“Maybe that’s not possible, they are human beings with profound differences between them.

“But if they have not reconciled, they will have to have reached some sort of civilised agreement to differ that everybody can accept.

“The world, and particularly Britain, would like them to come back together in some way.”

The Duke of Sussex, however, admitted in an interview for the documentary Harry & Meghan: An African Journey, to be on “a different path” from his elder brother.

Asked whether rumours of a rift between him and William were true, Harry refused to deny a falling out.

He said: “Part of this role, part of this job and this family being under the pressure it is under, inevitably stuff happens.

But look, we are brothers, we will always be brothers.

“We don’t see as much as we used to because we are so busy but I love him dearly and the majority of stuff is created out of nothing.